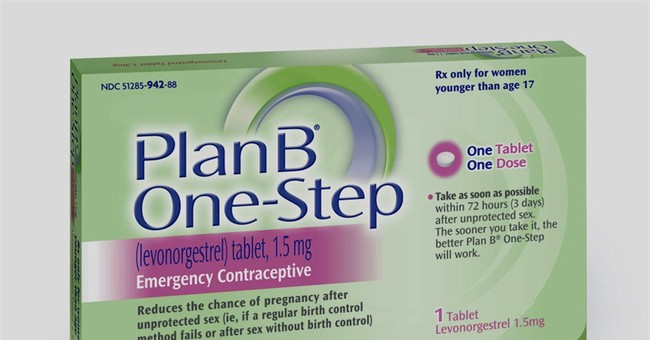 In a major blow to birth control proponents, the European equivalent of Plan B - known as the "morning after pill" - now includes a warning that the contraceptive is not effective for women over 165 pounds and does not work at all for women over 176 pounds. The implications are staggering: according to the Centers for Disease Control, the average weight of an American woman over 20 is 166.2 pounds.

Feminist outlet Jezebel pointed out that the saga began with a 2011 study:

...a 2011 study out of the University of Edinburgh, Scotland that found that "the risk of pregnancy was more than threefold greater for obese women compared with women with normal body mass index, whichever EC [Emergency Contraception] was taken." They also found that the risk of pregnancy was particularly high if that emergency contraception was made of levonorgestrel, the hormone found in many of the major over-the-counter morning after pills sold in the United States, like Plan B One-Step. The study recommended that overweight women use IUDs.

This is a - no pun intended - huge problem for American women, most of whom are overweight and are using the morning after pill in increasing proportions.

It is worth noting that the study only included data through 2010, and all trends point to increasing use of emergency contraception like Plan B. Many recent events encouraged the use of the morning after pill, including: Obamacare's insurance-covered contraception mandate, the FDA's approval earlier this year of non-prescription morning after pills, and the late 2012 push by pediatricians to expand birth control access to girls under age 17.

It is tragic that so many women who bought into the massive liberal campaign to expand use of the drug are not only using an ineffective method of birth control but are still operating under a false peace of mind. Many celebrated that emergency contraception would lower abortion rates by preventing conception, but if the pill is truly ineffective for most American women then it is hard to believe that it has decreased the rate of unwanted pregnancy.

Although Plan B is the most well-known American morning after pill, other similar emergency contraceptives are also implicated. These include:

At this point, neither the FDA nor major birth control manufacturers have responded to the developments in Europe or issued similar warnings. It is absolutely critical that users of birth control look past the propaganda of the drug's supporters and inform themselves. An unwanted pregnancy is not worth the risk.

UPDATE - The FDA is reviewing the evidence. Mother Jones has the full update here.