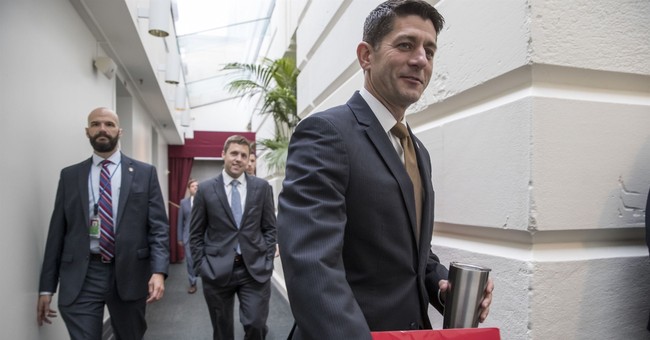 While Congress is dysfunctional, with most of the blame falling on the Senate side, a Republican member of the House is not letting Congress's failures deter him from fundraising and garnering support for the GOP.

That House Republican is House Speaker Paul Ryan (R-WI) and he has been raising millions to help Republicans win elections come November 2018.

According to POLITICO Playbook, Paul Ryan has raised $30 million for the National Republican Congressional Committee (NRCC). How much has the NRCC raised in total this year?

This means that Speaker Ryan has raised almost half of the NRCC's funds this year by himself.

Speaker Ryan is always traveling the country and speaking at various events to raise as much money as he can. One of Ryan's aides told POLITICO:

In 2017, Speaker Ryan has traveled to 30 states, nearly 65 cities, and has done almost 250 events on the road to help raise funds for Team Ryan, the NRCC, and members of the GOP conference. In DC, Speaker Ryan has done close to 50 events for Republican members, raising them over $4 million.

Even when Congress is in recess, Speaker Ryan is making travel plans. Next week he will be heading to Texas and New York to do more fundraising events.

The amount of money coming in from Ryan's efforts are certainly making the Republican Party happy. For Republicans, this shows that their base is still energized almost a year after the 2016 presidential election and that they are willing to support the politicians they have elected to office.

On the other side of the aisle, the Democratic Party, who needs its base to be energized to win House and Senate seats back next November, is struggling to raise funds. In August, Townhall reported on the Democratic National Committee's (DNC) fundraising woes. The DNC had brought in $42 million in the first seven months of the year while the Republican National Committee more than doubled that by raising $86.5 million.

While a party having more money does not necessarily guarantee it wins, it certainly helps. If the GOP can continue its fundraising success and pass legislation like tax reform by next November, they will not only have the financial support but the enthusiasm of voters as voters will see that real change has come to Washington.