Greece Gets a Bailout

Meredith Jessup
|
Posted: May 03, 2010 9:23 AM
Share   Tweet
As a member of the International Monetary Fund (IMF), the US joined countries around the world--and the European Union--in bailing out Greece this weekend.  Greece is now poised to receive a whopping 110 billion Euros ($146 billion) to try to prevent a default and hopefully maintain the Euro's value across Europe. 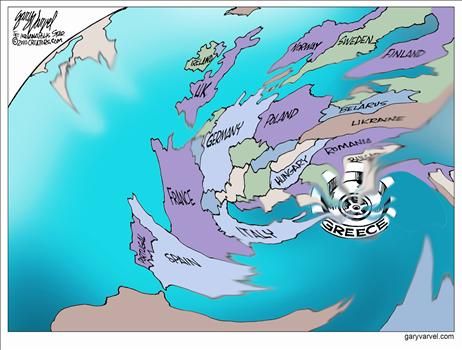 The 16-nation bloc will pay 80 billion euros at a rate of around 5 percent and the International Monetary Fund contributes the rest. Greece agreed to budget measures worth 13 percent of gross domestic product.

Policy makers agreed to the unprecedented bailout after investors’ concerns about a potential Greek default sparked a rout in Portuguese and Spanish bonds last week and sent stock markets tumbling. At stake is the future of the euro 11 years after its creators left control of fiscal policy in national capitals. ...

“The EU can afford to bail-out Greece and even Portugal, but it cannot afford bailing out Spain,” said Andrew Bosomworth, Munich-based head of portfolio management at Pacific Investment Management Co., which oversees the world’s largest mutual fund from Newport Beach, California. “Therefore a lot is resting on getting Greece right.”