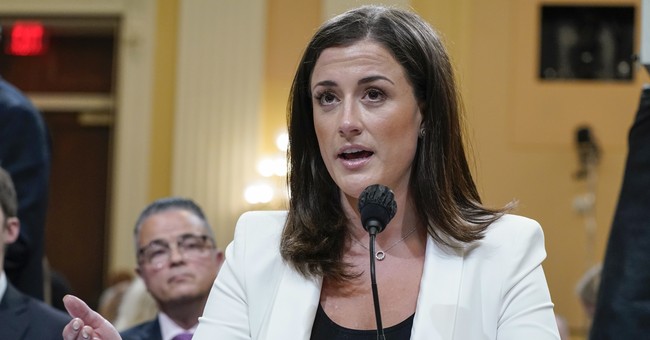 Cassidy Hutchinson was considered the smoking gun by the liberal media. The ex-aide to Trump White House Chief of Staff Mark Meadows testified before the House Select Committee on January 6, reciting some of the best tales since Homer’s Iliad and Odyssey. The commonality they share is that all three stories are soaked in myth. Some alleged stories are just facially untrue. Hutchinson’s biggest whopper is that Donald Trump tried to carjack the presidential motorcade to venture to the US Capitol on the day of the riot. Another whopper was that the Capitol Building was besieged by hordes of armed rioters armed with body armor and AR-15 rifles. No, video evidence refutes that thoroughly.

The president does not ride in the front seat of “the Beast.” The two secret service agents who were there came forward to debunk this fable, adding that they would happily testify under oath refuting everything Hutchinson said. The core of her testimony was gutted within 36 hours.

She was supposed to work for Trump as an aide in Mar-a-Lago after his presidency, but obviously, that didn’t work out. Now, we’ve learned that Hutchinson worked for Trump weeks after he left office before becoming a turncoat (via Business Insider):

Cassidy Hutchinson, the former Trump White House aide who emerged as a star witness for the US House committee investigating the January 6, 2021, attack on the Capitol, continued working on the former president's behalf for nine weeks after he left office, according to government records exclusively obtained by Insider.

Hutchinson served as a "coordinator" for Trump's official, taxpayer-funded, post-presidential office from about January 20, 2021, to April 1, 2021, earning an annualized salary of $90,000, the General Services Administration documents state.

The documents establish that Hutchinson continued to earn a government paycheck for work in support of Trump for weeks after she witnessed his actions — and lack of action — on January 6, even as other colleagues resigned soon thereafter.

Hutchinson's whereabouts immediately after January 6 has been the subject of considerable scrutiny and uncertainty. Bloomberg reported days after the attack that Hutchinson might join Trump in Florida, but Trump has said he hardly knew her and turned her down. The Washington Post in June reported that Hutchinson did not have a full-time job after her White House tenure ended.

"As an American, I was disgusted. It was unpatriotic. It was un-American," Hutchinson, who served as a trusted aide to the White House chief of staff Mark Meadows, testified before the January 6 committee on June 28. "We were watching the Capitol building get defaced over a lie. And it was something that was really hard in that moment to digest knowing what I'd been hearing down the hall in the conversations that were happening."

Of course, Rep. Liz Cheney (R-WY) drooled over this testimony that no one ever took seriously or watched, for that matter. These hearings are the last thing Americans care about in this economic recession brought on by the Biden administration.

The biggest hit to Hutchinson’s credibility was the unearthed texts showing that she considered herself an insurrectionist and called Cheney and Rep. Adam Kinzinger (R-IL), the two Republican traitors on this committee, egomaniacs.

Hutchinson’s testimony is shoddy at best, and why would she work for such an unpatriotic man for weeks? Does she still consider Cheney an egomaniac? In a sane world, Hutchinson’s play for a six-figure book deal and media contributor agreement with a liberal network should have ended when her lies were exposed. Then again, CNN hired professional liar Andrew McCabe, former deputy director of the FBI, to be a contributor so who knows.