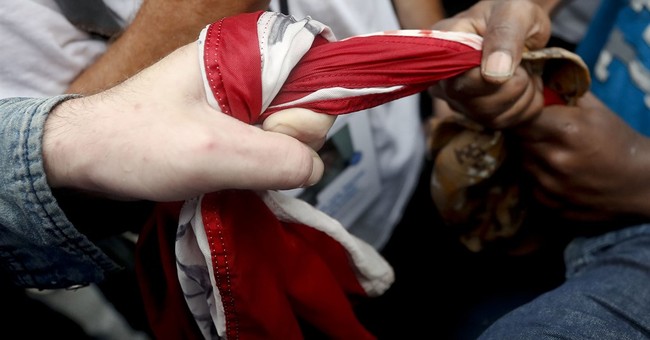 Folks, I stand corrected. I’m sorry. Like so many liberals who inhabit the country, I fell victim to short-memory syndrome. Social media wasn’t around in years past, so to our relief—a lot of the America-bashing liberals engage in on a daily basis was contained somewhat. Now, with liberals infesting big tech and its platforms, the echo chamber is massive, loud, and virtually impenetrable. Yet, before Twitter and Facebook came onto the scene, liberals were still peddling the same nonsense we saw this past July Fourth. It was expected. It’s not new. Hell, this has been a staple of American leftism ever since Jane Fonda frolicked with the Viet Cong.

We can thank our friends at the Media Research Center for compiling a list of the worst America-hating liberals over the past two decades. Some folks are no longer on air—and thank God for that, but I’m sure you’ll see some familiar faces, especially on MSNBC. Geoff Dickens deserves a day off for sifting through this progressive cesspool to find these examples (via NewsBusters):

“I decided to put on my flag pin tonight — first time. Until now I haven’t thought it necessary to display a little metallic icon of patriotism for everyone to see....I put it on to take it back. The flag’s been hijacked and turned into a logo – the trademark of a monopoly on patriotism….When I see flags sprouting on official lapels, I think of the time in China when I saw Mao’s Little Red Book on every official’s desk, omnipresent and unread. But more galling than anything are all those moralistic ideologues in Washington sporting the flag in their lapels while writing books and running Web sites and publishing magazines attacking dissenters as un-American....I put it on to remind myself that not every patriot thinks we should do to the people of Baghdad what bin Laden did to us.”

“We know what July 4th is. What about July 5th? After the fireworks, the music, the rhetoric of freedom what then?...What kind of nation does our flag fly over now? Not a less innocent one, because American innocence was never the truth. Not one less reluctant to go to war without a good reason, because we have foolishly credited bad reasons in the past. But now the nation lacks even that. As our President demonstrated last week, we have become a people who wage unending war killing and maiming our young ones and theirs without being remotely able to say why.”

“The framers were not gods and were not infallible. Yes, they gave us, and the world, a blueprint for the protection of democratic freedoms — freedom of speech, assembly, religion — but they also gave us the idea that a black person was three-fifths of a human being, that women were not allowed to vote and that South Dakota should have the same number of Senators as California, which is kind of crazy....If the Constitution was intended to limit the federal government, it sure doesn't say so.”

— Time managing editor Richard Stengel in the magazine’s July 4, 2011 edition, which featured a picture of the U.S. Constitution going through a shredder with the headline, “Does It Still Matter?”

“American independence in 1776 was a monumental mistake....I’m reasonably confident a world in which the revolution never happened would be better than the one we live in now, for three main reasons: Slavery would’ve been abolished earlier, American Indians would’ve faced rampant persecution but not the outright ethnic cleansing Andrew Jackson and other American leaders perpetrated, and America would have a parliamentary system of government....Government spending in parliamentary countries is about 5 percent of GDP higher.”

Standing For National Anthem is “Affirmation of American Empire”

“It’s a political statement to pledge allegiance to the flag. It’s a political statement to stand for the singing of the National Anthem. The fact is, Colin Kaepernick and me and many other people simply have different politics. It’s not neutral to pledge allegiance or sing the National Anthem. It’s an affirmation of the American empire.”

“The land on which they [the Founders] formed this Union was stolen. The hands with which they built this nation were enslaved. The women who birthed the citizens of the nation are second class….This is the imperfect fabric of our nation, at times we’ve torn and stained it, and at other moments, we mend and repair it. But it’s ours, all of it. The imperialism, the genocide, the slavery, also the liberation and the hope and the deeply American belief that our best days still lie ahead of us.”

— MSNBC host Melissa Harris-Perry on her eponymous July 1, 2012 program, delivering what she called “my footnote for the Fourth of July.”

There are many more examples; 20 in all to be exact. So, when NPR decided to remind us that the Declaration of Independence isn’t inclusive, we shouldn’t have been shocked. I’m sure you weren’t. The Left just has a massive platform to smother us with this garbage all the time. The good news is that liberals are a minority. They’re way out of step with most voters, even those who vote reliably Democratic. The hyper-intense ideological delivery and stance on the issues aren’t going to bode well for Democrats in national elections since these white liberals either mock or outright despise people who aren’t like them. It may be shocking to these people but standing for the American flag and the national anthem are considered good things, respectful as well. Saying you’re akin to a Klan member for doing so is not going to play well and that’s one minor issue. Eventually, Democrats are going to get wrecked for their woke agenda that peddles an open borders, pro-crime, and anti-police agenda. The American-bashing only makes things worse.