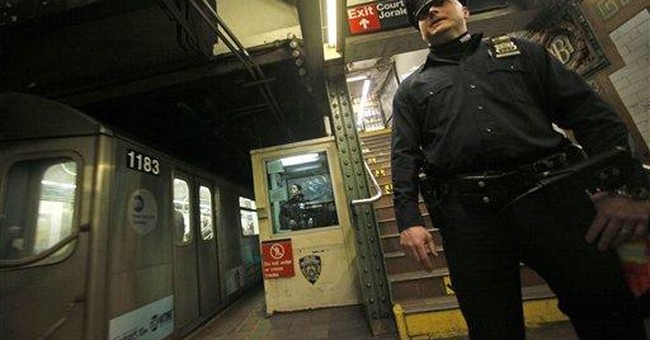 New York City is the mecca for the Wuhan coronavirus outbreak in the United States. There are now over 206,000 Wuhan coronavirus cases in the country. It has killed over 4,500 Americans. Almost half of all Wuhan virus cases come from the Big Apple. It’s no shock. The city celebrated the Chinese New Year. And the response from the city has been disastrous. We’ve all seen the clips of Mayor Bill de Blasio and NYC Health Commissioner Oxiris Barbot pretty much saying that all was well. Yes, their tune has changed since then, but Barbot reportedly told de Blasio on March 10 that he needed to clamp down hard to control the spread of this flu-like virus, albeit one that’s deadlier. De Blasio refused and then said that people who are healthy can still go out to eat.

With New York City now shut down in order to contain the spread, the one threat that could torpedo efforts to get things under control might come from below: the city’s homeless piling into the subways. It may be time for the NYPD to sweep this area of public transpositions, which also carries the risk of exposing the police to the disease. Some 1,400 members of the NYPD have been infected by this virus. It’s dangerous, but dealing with the homeless in these areas might have to be a priority (via NY CBS Local):

The homeless are packing New York City subways again, raising health concerns amid a chorus of demands that Mayor Bill de Blasio do something.

In normal times pictures of the homeless sleeping in car after car on the subway are a cause for concern. But these are not normal times and Michael Fischer, president of the Central Park South Civic Association, is sounding the alarm, CBS2’s Marcia Kramer reported Tuesday

He’s worried that the homeless, who have little access to soap and sanitizers, could spread the coronavirus.

“It’s a capital D. It’s a disaster. The city knew about this for two months. They knew that we had a terrible virus that was hitting the city, hitting the world, and they didn’t do a thing about it,” Fischer said.

City Council Speaker Corey Johnson said he’s worried about the number of homeless on the subways. He said the mayor should put the street homeless in empty hotels.

So, did de Blasio know about this area of potential danger concerning the spread of this virus for months? And did nothing? It’s all part of a narrative that Billy’s response to this crisis has been disastrous, and yet he speaks as if he’s an angel who did no wrong as he bashes President Trump over this management of this crisis, management that is approved by the majority of the country.