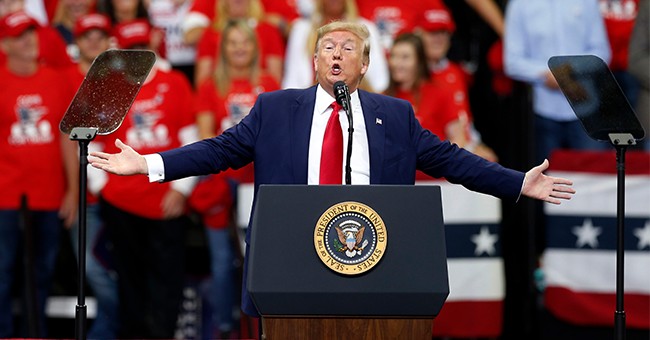 Bronson wrote about the alleged Trump-Ukraine whistleblower. His name has reportedly been revealed: Eric Ciaramella. Yes, it’s everything you’d expect from an anti-Trump deep state operative. He’s an Obama holdover, a registered Democrat, a CIA agent, and worked with a Democratic National Committee operative, Alexandra Chalupa, to get dirt on Trump in 2016. Paul Sperry at Real Clear Investigations did the deep dive (via RCI):

Federal documents reveal that the 33-year-old Ciaramella, a registered Democrat held over from the Obama White House, previously worked with former Vice President Joe Biden and former CIA Director John Brennan, a vocal critic of Trump who helped initiate the Russia “collusion” investigation of the Trump campaign during the 2016 election.

Further, Ciaramella (pronounced char-a-MEL-ah) left his National Security Council posting in the White House’s West Wing in mid-2017 amid concerns about negative leaks to the media. He has since returned to CIA headquarters in Langley, Virginia.

Also, Ciaramella huddled for “guidance” with the staff of House Intelligence Committee Chairman Adam Schiff, including former colleagues also held over from the Obama era whom Schiff’s office had recently recruited from the NSC. (Schiff is the lead prosecutor in the impeachment inquiry.)

And Ciaramella worked with a Democratic National Committee operative who dug up dirt on the Trump campaign during the 2016 election, inviting her into the White House for meetings, former White House colleagues said. The operative, Alexandra Chalupa, a Ukrainian-American who supported Hillary Clinton, led an effort to link the Republican campaign to the Russian government. “He knows her. He had her in the White House,” said one former co-worker, who requested anonymity to discuss the sensitive matter.

Prior to Ciaramella being named as the possible whistleblower, there were reports that this person had contacted Adam Schiff’s staff prior to filing the report. Schiff knew of its contents beforehand. Remember that this report is based on second-hand information, Ciaramella, or whoever the alleged whistleblower is, never listened in on the July call, where there has been an allegation that Trump shook down the Ukraine political leadership into opening a corruption probe into Hunter Biden or risk having aid withheld. It’s shoddy. The impeachment process has up until recently been in the dark, where Schiff has been controlling the flow of information, even towards GOP members on the House Intelligence Committee, who are given a one-page summary of the interviews that can only be read in the presence of a Democratic staffer.

Per Catherine Herridge: IC Inspector General told lawmakers the whistleblower did not disclose contact w Schiff/Committee staff - so IG never looked into it. IG “had no knowledge of it”.

This is why Rep. Collins wants Adam Schiff to testify: Schiff Received the Whistleblower Complaint a Month Ago and Didn't Report It Until Now, Why? https://t.co/5dblPEWxmY

And now, we have this whistleblower concealing his contacts with the Intelligence Community inspector general (via The Federalist):

The anti-Trump whistleblower whose allegations against President Donald Trump sent Congress into an impeachment frenzy concealed his interactions with House Democrats from the Intelligence Community Inspector General (ICIG) and failed to disclose them as required, Fox News reported on Friday.

According to Fox News investigative reporter Catherine Herridge, ICIG Michael Atkinson testified before the House Permanent Select Committee on Intelligence (HPSCI) that the anti-Trump complainant, whose identity has not been made public, did not inform the ICIG in his complaint that he or his team had already contacted Democratic staff working for Rep. Adam Schiff, D-Calif., the chairman of the House intelligence committee.

The complainant’s failure to disclose his interactions with Schiff or his staff could put him in legal hot water, as the whistleblower form he submitted requires individuals to disclose “other actions you are taking on your disclosure” under penalty of perjury. An entire page of the whistleblower form is dedicated to collecting information about previous disclosures so the ICIG can take appropriate action in response to the complaint.

To add more to the palace intrigue, we’re hearing that the National Security Council official who actually listened in on the call, said that nothing illegal was discussed and that the Trump White House transcript of the call that debunked the quid pro quo nonsense is accurate.

Democrats took this whole effort into the bunker because they wanted narrative control. The public hearings they held for Russian collusion trashed that first attempt to impeach Trump, so Schiff and his minions went DEFCON 1 in order to manufacture this circus. Also, they could get away with stuff like this in the shadows:

So, excuse me if I’m a bit skeptical of this entire charade. We have a whistleblower who is a Democrat, worked at the Obama White House, contacted that main QB for the impeachment effort—Schiff—and then didn’t tell the ICIG about these little rendezvous. Oh, and all of this while the Democrats were holding a secret impeachment trial against President Trump because he won the 2016 election. Yeah, until all the transcripts of the interviews thus far have been released. I will never believe anything the Democrats have to say, especially if it’s from shifty Schiff’s office. It's all a bit…coup coup.