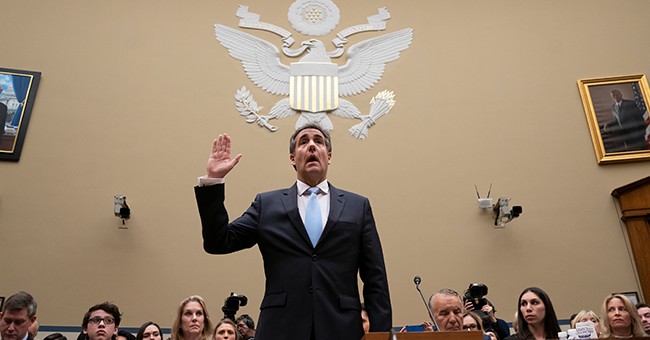 President Trump’s former lawyer Michael Cohen testified before Congress last week. It was a clown show. The man is a convicted liar. He’s slated to start his four-year jail sentence shortly. It was a back-and-forth between Democrats who somehow think this guy is now Mr. Reformed and a credible witness in their ongoing crusade to impeach the president. Republicans kept brining up his convictions, which include lying to Congress (via NYT):

Michael D. Cohen, a former lawyer for President Trump, was sentenced to three years in prison on Wednesday after denouncing Mr. Trump and explaining that “I felt it was my duty to cover up his dirty deeds.”

Mr. Cohen gave an emotional apology to the court for his involvement in a hush-money scandal that could threaten the Trump presidency — a scheme to buy the silence of two women who said they had affairs with Mr. Trump to protect his chances before the 2016 election. Mr. Cohen said his blind loyalty to Mr. Trump led him to ignore “my own inner voice and my moral compass.”

The sentencing in federal court in Manhattan capped a startling fall for Mr. Cohen, 52, who had once hoped to work by Mr. Trump’s side in the White House but ended up a central figure in the inquiry into payments to an adult-film star and a former Playboy model before the 2016 election.

Judge William H. Pauley III called Mr. Cohen’s crimes a “veritable smorgasbord of fraudulent conduct” and added, “Each of the crimes involved deception and each appears to have been motivated by personal greed and ambition.”

He’s not a credible witness. So, in all, if you missed it, it was a mixture of Trump derangement syndrome from Democrats and yelling from Republicans and for good cause. The whole hearing was a circus.  With the report from Special Counsel Robert Mueller, who has been investigating Russian collusion with the Trump team, about to drop, it seems pretty clear that it’ll be a nothingburger. There will be no smoking gun proving that the Trump team colluded with the Kremlin during the 2016 election. This has been the Democrats' unicorn for over a year.  So, a secondary protocol is being deployed. Democrats are pushing back the goals posts in their long game to impeach Trump. And they’re using the worst people to make their case. Case in point, Mr. Cohen's testimony before Congress. Maybe they also figure that if they cannot impeach Trump, they'll just assassinate his character. Well, with Cohen's testimony one for the books, and I don't mean that in a good way, it's being reported that he wasn't truthful about his answer concerning presidential pardons (via WSJ):

The Wall Street Journal previously reported that Stephen Ryan, Mr. Cohen’s attorney at the time, discussed the possibility of a pardon with lawyers for Mr. Trump in the weeks after the Federal Bureau of Investigation in April raided Mr. Cohen’s home, office and hotel room. The president’s lawyers, including Jay Sekulow, Rudy Giuliani and Joanna Hendon, dismissed the idea of a pardon at the time, people familiar with the discussions said. But at least one of them, Mr. Giuliani, left open the possibility that the president could grant Mr. Cohen one in the future, they said.

In testimony before the House Oversight Committee last week, Mr. Cohen said: “I have never asked for, nor would I accept, a pardon from Mr. Trump.”

Welp, that part turned out to be false. When the Left is trying to weaponize Michael Cohen to get Trump, you know a) what a time to be alive; and b) they’re desperate. You just can't make this up or maybe you can. the man was convicted of lying to Congress, Democrats. I'm sorry to tell you, but Trump won't be hurt by Mr. Cohen.

Lanny Davis to @washingtonpost tonight: Cohen “did direct his attorney to have a discussion. They had been dangling it for a while and it was a constant refrain. So Michael had his attorney reach out to Rudy Giuliani.”

Reps. Jim Jordan and Mark Meadows sent a 30-page letter outlining a number of Cohen's comments, which the pair, both hardline Trump supporters, are claiming to be lies. In the letter, which is addressed to Attorney General William Barr, Jordan, the top Republican on the House Oversight Committee, and Meadows ask that Cohen be investigated for perjury and making false statements.

"His testimony included intentionally false statements designed to make himself look better on a national stage," the pair wrote in the letter, which included exhibits and a copy of Cohen's testimony before the House Oversight Committee.

Jordan and Meadows allege Cohen was untruthful when saying he did not want a job within the White House, that he did not help in the creation of a flattering Twitter page and that he did not have contracts with foreign governments. The pair also say in the letter that Cohen's remarks on Wednesday that his legal trouble was caused by a "blind loyalty" to Trump contradicted how federal prosecutors have characterized the reasoning behind his downfall, which they say was the outcome of greed.

Meadows and Jordan also claim that Cohen lied and should be charged because he said on Wednesday that he never defrauded a bank, something that he has not been charged with.