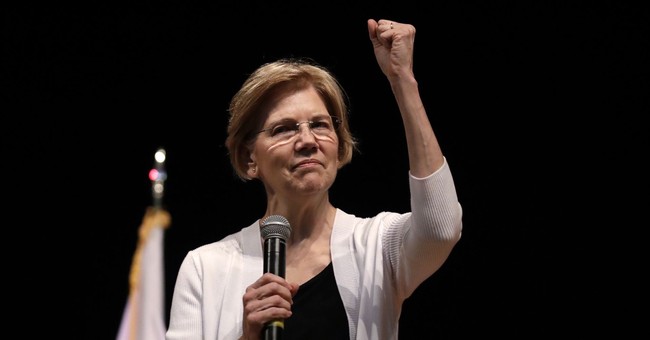 Tomahawk Liz is not a Cherokee. It’s only something that everyone who wasn’t a blind and stupid liberal had known for years. She’s just a white woman appropriating Native American culture for personal gain. She took a DNA test, which showed that she’s a whopping 1/1024th Native American. In other words, she’s not an American Indian, despite her shoddy family story about high cheekbones. She’s a fake who peddled a racial hoax, something that’s been hanging around her neck since 2012.

Fordham pushed that Warren was Harvard's first woman of color due to her Native American heritage. This is indefensible, but the liberal media decided to take the 1/1024th fraction as full-blown proof that Warren was telling the truth and not peddling a racial hoax, which is what it looks like. The Media Research Center’s NewsBusters wing had a field day, noting how major networks, contributors, and guests across the liberal media spectrum did their best to defend a white person of cultural appropriation.

"Despite her proof?" She only proved she's less Native American by blood than the average white person. https://t.co/2w00zIXjYq

On MSNBC, Zerlina Maxwell accused the Cherokee Nation of being discriminatory.  They had recently trashed Warren’s DNA stunt, saying it was inappropriate and wrong:

I think it’s a complicated answer. I think that it wasn’t fully a smooth rollout of the DNA testing and the video, and it put to bed a lot of the controversy. Obviously it was because President Trump had said he was going to give a million dollars to a charity if she could prove, using a DNA test, that she was part native. She did that. He’s not giving the money to the charity. He also denied saying that. So it sort of puts him on the defensive in some ways.

But in terms of the Cherokee Nation’s statement, I found that to be ridiculous. I am also part Cherokee, but I have not taken a DNA test. I’m not trying to join a tribe or claim membership in a tribe, and neither did Elizabeth Warren.

So to be clear, I think that while the rollout of the DNA test and the decision to do a DNA test to be able to, quote, “prove” that she is part Cherokee, may not have been the best method. I also think that the Cherokee Nation’s response was problematic because it actually ignores the fact that DNA testing historically has been used to exclude black natives from tribal affiliation. And so, that history has been completely lost in this entire conversation, and that’s potentially very unfortunate.

The Big Three (ABC, CBS, and NBC) circled the wagons around Warren, ignoring math, but also the statement from the Cherokee Nation torching Warren’s antics over this matter:

…she was only 1/1,024th Native American. Despite that fact, the liberal broadcast networks (ABC, CBS, and NBC) promoted her campaign message and portrayed her as the victor.

On NBC Nightly News, they were eager to prove that it was somehow a terrible day to be President Trump. “Now to Senator Elizabeth Warren doing something unprecedented after years of ridicule from President Trump and Republicans over her claims of Native American ancestry,” declared anchor Lester Holt.

NBC White House correspondent Kristen Welker touted how Warren supposedly “calling his bluff” with her announcement. “Warren firing back, tweeting President Trump is attacking her because he's scared, as she looks ahead to her next political chapter,” Welker gushed after spending her entire report making it sound as though Trump was on the defensive.

Besides bringing back the ridiculous claim that calling Senator Warren “Pocahontas” was a “racial slur,” ABC kept harping on a bet Trump made at a rally for her to prove her heritage. “President Trump, who calls her ‘Pocahontas’, has suggested he would pay $1 million to a charity if she took a DNA test to prove her heritage. Tonight, she says it’s time to pay up,” proclaimed sensationalist anchor David Muir during World News Tonight.

According to a New York Times report form 2014: “The researchers found that European-Americans had genomes that were on average 98.6 percent European, .19 percent African, and .18 Native American.” Warren had as low as .098 percent Native American DNA or about half the average.

But that didn’t stop ABC from acting as though it was a boon for her and her likely 2020 campaign. “Warren was told she had a Native American ancestor in the range of six to ten generations ago. But tonight, the President is scoffing at the results,” huffed ABC congressional correspondent Mary Bruce. “Well David, her team says this is simply an effort to clear the air, to be transparent, but the timing of all of this leaves no one with much doubt.”

The networks were so disgustingly in the tank for Senator Warren that all three ignoredthe scathing rebuke by the Cherokee Nation.

Oh, and let’s not forget that some in the New York Times editorial department think this whole attack on Warren by Trump, who hilariously calls her Pocahontas, was about race and who’s white in America. It’s your typical progressive, nonsensical crap:

Curious as to how clueless is The New York Times? Mara Gay — a member of the Gray Lady's editorial board— claimed on Ari Melber's MSNBC show Monday night that President Trump's mocking of Elizabeth Warren's phony claim to be a Native American "was actually about white anxieties among Donald Trump's base about who's white in America."

Wrong, wrong, and even more wrong. She’s not a friggin’ Native American. You people are throwing up a defense over…nothing. CNN contributor Scott Jennings, who typically isn’t one to do combat on the airwaves, laid into Warren and laying waste to liberal Joan Walsh’s crappy defense of Warren. Partial transcript below courtesy of NewsBusters:

Walsh fiercely defended Warren for “authenticating her story,” while Jennings nuked “bizarro Pocahontas” Warren for “desperate” attempt “to be part of the failed identity politics that ruined the Democratic Party” and served as “the most pathetic self-own I’ve ever seen.”

WALSH: — she’s putting it out there.

JENNINGS: — and it's going to sound crazy to anybody —

WALSH: She’s been accused of having none and she’s proving she had some.

JENNINGS: — who doesn’t — isn’t absorbed by the self-identity politics. This is —

WALSH: It's not about identity politics. She says she actually put — she started using this identity when her aunts were dying, when her mother was dying, when the women in her family who were connected to this lineage were leaving, when they were talking about the past, and that she put it in this booklet, so she could be a mentor to other students. She never used it for any —

JAKE TAPPER, CNN: That's all the time we have[.]

Yeah, this is why lines like “her or his truth” are flat out stupid. There is only one truth, and that is Tomahawk Liz is no Indian. Liberal America can’t defend her. If they do, they look like morons, which is also just a day that ends in “Y” in that respect. The Times appears to have come around on this nonsense, admitting defeat, but it’s funny how the Left rails against the horror of cultural appropriation but is now totally behind a white person peddling a racial hoax for political gain. As the saying goes, if liberals didn’t dabble in double standards they would have none.