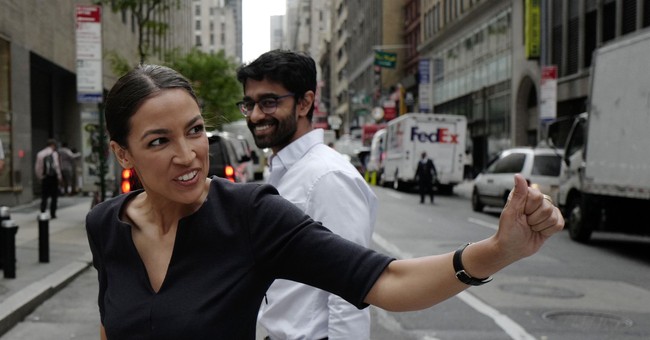 Alexandria Ocasio-Cortez scalped Rep. Joe Crowley (D-NY), a top Democrat in last week’s primaries. She’s a self-described democratic socialist, a pro-abolish ICE candidate, and is part of the ascendant progressive wing of the Democratic Party. Make no mistake that the far left is clinching some key wins, though some pollsters are taking a more slow your roll on the narrative that the Democratic Party is being engulfed by full-blown socialists.

Ocasio-Cortez is clearly indicative of some underlying trends within the Dem Party... but the fact that many (most) lefty candidates have lost in primaries this season & only 1 incumbent has been knocked off should, I think, give us pause in drawing too many drastic conclusions.

Nevertheless, some Democrats are throwing cold water on Ocasio-Cortez’s upset win, saying her brand of politics is good for New York City, specifically Queens, but not Midwest USA. Sen. Tammy Duckworth (D-IL) made that point (via The Hill):

Sen. Tammy Duckworth (D-Ill.) on Sunday warned against Democrats shifting “too far to the left,” saying it could ostracize Midwestern voters.

Duckworth made the comments on CNN's "State of the Union" when pressed about Alexandria Ocasio-Cortez's upset win over longtime Democratic Rep. Joseph Crowley in New York last week.

Ocasio-Cortez, a self-described democratic socialist, defeated the fourth-ranking House Democrat who many had floated as a potential future Democratic Speaker of the House.

“State of the Union” host Jake Tapper asked Duckworth on Sunday if she felt Ocasio-Cortez represents the future of the Democratic Party.

“I think it's the future of the party in the Bronx, where she is,” Duckworth said.

“I think that you can’t win the White House without the Midwest and I don’t think you can go too far to the left and still win the Midwest,” Duckworth said during the interview.

The abolish ICE mantra is becoming a growing cry among the far left, which has made some Democratic pollster pop signal flares, warning that this position could torpedo Democratic hopes at the polls. For now, however, Cortez seems to be focusing on trying to dispel the notion that she’s too far left, or something. She responded to Sen. Duckworth by saying her values could resonate with Middle America. In a tweet over the weekend, she wrote, With respect to the Senator, strong, clear advocacy for working class Americans isn’t just for the Bronx. Sen. Sanders won Michigan, Minnesota, Kansas, Nebraska, Wisconsin, [and] Indiana …we then lost several of those states in the general. What’s the plan to prevent a repeat?”

With respect to the Senator, strong, clear advocacy for working class Americans isn’t just for the Bronx.

We then lost several of those states in the general. What’s the plan to prevent a repeat? https://t.co/99K08qr7SH

Yeah, but here’s the problem: Sanders did well with working class whites. Democrats, overall, hate these people—and with the exception of Minnesota, Trump won all of those states. For Minnesota, Clinton barely carried it by a mere 1.5-point margin. So, while Cortez is right that in the primaries, this was Sanders country—Trump’s agenda quickly made it his neighborhood.

Cortez is positioning herself to be a die-hard anti-Trump crusader, but first, she needs to name-drop her lipstick, which she did. It quickly sold out.