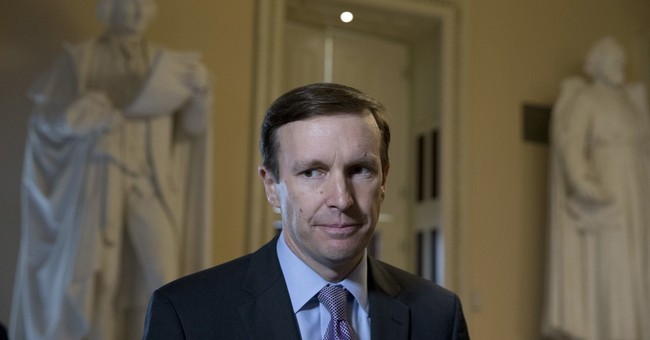 This is the nature of gun politics now, folks. Every time there’s a mass shooting, the anti-gun Left simply cannot hold their tongues. We should mourn the victims, pray for the families, and wait for the authorities to conduct their investigation. That’s not allowed.  After the horrific shooting at Marjory Stoneman Douglas High School in Parkland, Florida, Sen. Chris Murphy (D-CT) took to the Senate floor today to lecture his colleagues.

Sen. @ChrisMurphyCT on Parkland, Florida School Shooting: "This happens nowhere else other than the United States of America, this epidemic of mass slaughter, this scourge of school shooting after school shooting." pic.twitter.com/bgIrYzrDRl

“This happens nowhere else other than the United States of America, this epidemic of mass slaughter, this scourge of school shooting after school shooting,” he said. Actually, shootings occur in other countries all the time, Senator. Have we forgotten about the Paris attacks in 2015? Second, mass shootings are rare. They still are, even FiveThirtyEight admitted this—and added that to view the gun violence issue solely through the prism of mass shootings is a good way to craft some pretty bad policy.

Murphy also said that it happened as a consequence of congressional inaction. Okay—first, we don’t know anything about the shooter, Nikolas de Jesus Cruz, who shot and killed 17 people and wounded at least a dozen others. We don’t know the weapon or weapons he used. We don’t know his motivations. He was expelled. We simply don’t know. Second, the big push Democrats tried to do on gun control was preventing Americans who had not been convicted of a crime from buying guns. Yes, that’s the no fly no buy gun push. As attorney and Washington Examiner contributor Gabriel Malor noted, these are secret lists and there is zero due process of law. In fact, this idea was so bad that the LA Times editorial board agreed with the Second Amendment crowd for once in declaring that the people on the no fly list should be able to buy firearms:

With regards to the terror watch list, which has around 1.1 million names, just 10,000 Americans are on that list. Everyone else is not a U.S. citizen, already barring him or her from purchasing firearms (yes, I know—criminals don’t follow laws with firearms).

That leaves us with about 10,000 American citizens (and some legal residents) who, under the proposed law, would be barred from exercising a constitutional right. That gives us pause,” wrote the editorial board.

Was Cruz a terrorist? We don’t know, so why even suggest that making this into a law would be something to further public safety. Most new gun initiatives from Democrats wouldn’t stop mass shootings or prevent gun violence. That’s evident with their failed so-called assault weapons ban.

So, all this did was politicize something without knowing all the facts—typical of Democrats. The anti-gun crowd is going to mobilize over this tragedy. They will push the same talking points and push for the same bills that won’t stop or reduce mass shootings. The cumulative effect argument is crap. One bad bill that doesn’t reduce mass shootings won’t be helped by a slate of them. What if Cruz bought these firearms legally? What if he had mental health issues? For the first, there’s nothing you can do. A person without a violent history, criminal convictions, or documented mental health issues will pass a background check, as they should. The second is an area where both sides can find common ground, but Democrats aren’t satisfied because they want so-called universal background checks to come with it.

It’ll end as it always does. The Left beats their chest; they get beat because the facts are not on their side, and a chance to do something, like improving detection for those with mental health issues, is squandered.

And a very good reminder about these incidents:

Just your all-too-frequent reminder that social media is poison during mass shootings.

Becasue this is what a Democratic Tennessee U.S. Senate candidate said:

‘What Is a Woman?’: Matt Walsh Appears on ‘Dr. Phil,’ Presses ‘Non-Binary’ Individuals on Gender
Townhall
Quillette founder thinks you're 'willfully blind' if you think the 'anti-woke machine' is going to stop after sinking CRT
Twitchy
CNN Demolishes Biden in Brutally Honest Assessment
Redstate
Giving Up on Canada
PJ Media