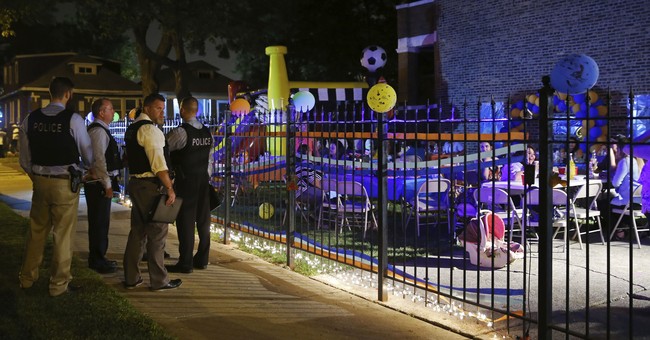 It wasn’t as bad as last year, but Chicago still ended 2017 on a violent note. We saw this coming from months ago. Last April, the city already had 1,000 shooting victims.  There was a string of bloody weekends during the summer, where dozens were wounded. On Fourth of July weekend, 14 people were killed and over 100 wounded in a string of shootings. August was not much better. By September, the city had reached 500 homicides.

The nation’s third-largest city ended 2017 with 650 murders, about 15% fewer homicides than a year earlier but still an unusually high number of killings during a period when other big cities have seen a reduction in violence, according to police data released Monday.

While there was a significant drop in gun violence in the city in 2017 compared to the year prior, Chicago topped the 600 mark for the second straight year and continues to see a level of violence that was typical of the late 1980s and 1990s when many major metros were dealing with the scourge of gang-fueled drug violence.

For the second straight year, Chicago also tallied more murders than New York City and Los Angeles combined. In fact, New York’s murder rate fell to the lowest the Big Apple has seen since the 1950s.

The number of shooting incidents in Chicago dropped from 3,550 to 2,785 for the same period. Police say they bulk of the violence is gang-related.

The reduction in the number of shootings could be credited to more technology being deployed in the field and better response times. Chicago Police have been installing noise detection devices, which can detect when a shooting has occurred, allowing authorities to pinpoint the location through sound detection that is then transmitted to responding units (via ABC News):

Police have been particularly encouraged by the results of setting up Strategic Decision Support Centers in six of the city's 22 police districts, including those in the most violent pockets of the city. The centers are equipped with sound-detection technology that enables the department to instantly know where the sound of gunfire is coming from and to alert officers through computer screens in their squad cars and smartphones.

One of the first districts where a center was set up was in Englewood, a neighborhood on Chicago's South Side that has long been known as one of the city's most violent.

Englewood had seen 48 homicides as of late December, compared to 86 during the same period in 2016. Police hope the trend continues in the neighborhood. They plan to roll out centers in six more police districts this year.

Still, ending the year with 600+ homicides and over 3,500 shooting victims shows the Windy City has a long way to go to reducing violence on the streets.