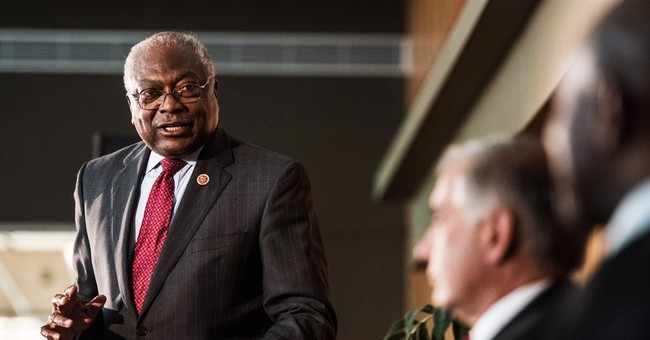 UPDATE: Clyburn now calls on Conyers to resign. The woman who settled with the congressman, Marion Brown, also came forward this morning on the Today Show. Brown is a black woman, which makes Clyburn’s shoddy Susan Smith remarks even more ridiculous.

We didn’t go there, did we? I mean seriously? Did Rep. James Clyburn (D-SC), the third ranking member of the House Democratic Caucus, pretty much insinuate that the accusations against Rep. John Conyers (D-MI) shouldn’t be believed because the accusers are white? Conyers is under fire for sexual misconduct. In 2015, he settled a sexual harassment claim to the tune of $27,000 in taxpayer money. Melanie Sloan, a Washington lawyer, claimed to be the subject of verbal abuse by Conyers, even walking into his office to see the Michigan Democrat half-dressed. She has not alleged any sexual harassment, but Deanna Maher, Conyers’ former deputy chief of staff, is a separate story (via Detroit Free Press) [emphasis mine]

Deanna Maher, who worked for him from 1997 to 2005, told The Detroit News that the Detroit Democrat made unwanted advances toward her three times.

Clyburn has already made controversial statements about Conyers’ sexual misconduct allegations, saying that they could all be made up. Yet, the House Assistant Democratic Leader seemed to have stepped on a rake by suggesting the accusers against Conyers, who are white, shouldn’t be believed because of Susan Smith, a disturbed South Carolina woman who was convicted of drowning her sons back in 1995; Smith lied to authorities by saying a black man carjacked her vehicle and kidnapped her children. Yeah, it’s a rather shaky defense of Conyers. Also, we’re really going to invoke race into this?

Also at this morning's House Democratic caucus: James Clyburn compared Conyers' accusers to the child murderer Susan Smith, who initially claimed a black man had abducted her kids. Clyburn said, these are all white women who've made these charges against Conyers.

Yes, according to 2 sources. One told me Clyburn has used the Susan Smith parallel more than once, to members & staffers. https://t.co/3SjKCzjBh8

Alex Moe of NBC News also posted a video of reporters asking Congressional Black Caucus chair Rep. Cedric Richmond (D-LA) and Clyburn about why Conyers hasn’t stepped down when men from other industries who have been accused o such conduct have been removed or taken their exits in kind. Richmond asked for examples, to which the press replied Harvey Weinstein, Charlie Rose, and Matt Lauer. Clyburn responded with “who elected them?”

Robert Draper of The New York Times Magazine and National Geographic tweeted about the Smith remarks, which was criticized by Clyburn as being inaccurate, but two sources confirmed to Draper that Clyburn was making this analogy, and the Congressional Black Caucus also confirmed this as well. Clyburn also tried to do some damage control for the “who elected them?” remarks, which gave the impression that members of the Hill play by a separate set of rule when it comes to sexual misconduct (via The State):

“So it’s different because he’s elected,” but the elevator doors closed before Clyburn might have responded.

But after 5 p.m., Clyburn posted his official statement regarding a House Resolution that read very differently than the flippant response to reporters in the halls of the Capitol.

“As elected officials, we ought to be held to a higher standard,” Clyburn said in his statement. “Congress must review and improve the current administrative procedure for victims to come forward. All harassment and discrimination allegations must be taken seriously.”

This might have been in response to the criticism leveled at Clyburn.

Many comments critical of Clyburn have been posted on social media. Among them, people are questioning his logic, asking him to resign – in delicate and powerful terms – and calling him a poor representative of South Carolina.

A writer for The New York Times Magazine and National Geographic tweeted that Clyburn invoked the name of Susan Smith, South Carolina’s infamous child murderer, in his defense of Conyers.

“James Clyburn compared Conyers’ accusers to the child murderer Susan Smith, who initially claimed a black man had abducted her kids. Clyburn said, these are all white women who’ve made these charges against Conyers,” Robert Draper tweeted.

When asked if that comment was true, Draper said he verified it through two sources, adding “Clyburn has used the Susan Smith parallel more than once, to members & staffers.”

The Congressional Black Caucus tweeted about the alleged Susan Smith comment, saying Clyburn “used the Smith example to illustrate the dangers of convicting people before getting all the facts.”

Let’s circle back to the Smith example. Why? Wouldn’t it have been easier to say we have to get all the facts and let the system of due process work here? Of course, it would—but that hasn’t been the party line. Remember the reforms to Title IX Education Secretary Betsy DeVos brought forward on this subject. It placed an emphasis on due process. The Left went ballistic.

Recommended
This Trial Was A Disgrace
Kurt Schlichter

“On too many campuses, a new attitude about due process — and the right to be presumed innocent until proved guilty — has taken hold,” wrote The Atlantic’s Emily Yoffe.

Now, because Conyers and Sen. Al Franken (D-MN), who is in hot water for forcibly kissing, groping, and grabbing the rear ends of multiple women, are in the crosshairs, due process is what’s needed? Yeah—this come to Jesus moment on this is crap. We all know it’s borne out of the political climate. Yet, it also sends a message that it’s okay to harass women, as long as you’re a liberal Democrat. The Bill Clinton protocol is still in effect. For Clyburn, well, he decided to rip a rather odd and somewhat extraneous example to defend Conyers: a disturbed white woman who told a lie to police about a black man carjacking her. Ms. Maher and Ms. Sloan are not mentally ill. And yes, they’re white. So what? That in itself doesn’t make it any less credible. I don’t think identity politics is going to save your pals, Clyburn. This was a stupid remark to make, not matter what the intention.