Jeff Flake's Out: Is There Anything Honorable About Arizona Senator’s Exit, Or Is He Just A Quitter? 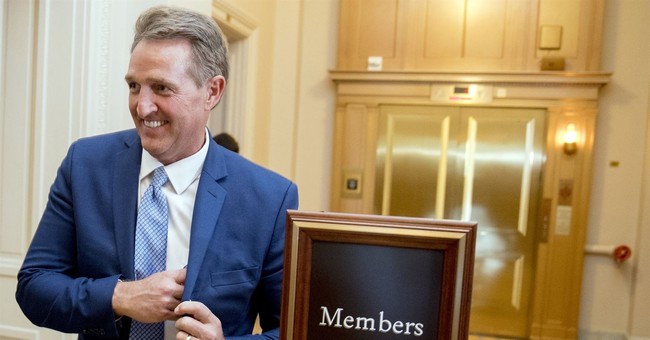 Sen. Jeff Flake (R-AZ), who barely won his 2012 election, has decided to throw in the towel. Why? Well, for a couple reasons, one is that he felt, no—he admitted that he probably couldn’t survive a primary challenge. A preliminary poll had former Arizona State Sen. Kelli Ward beating him by 14 points. The second is that he’s not happy with President Trump or the state of the GOP (via NBC News):

The day after Sen. Jeff Flake announced he would not run for re-election, citing his dismay over President Donald Trump and the state of the GOP, the Arizona Republican acknowledged Wednesday that his decision came after he realized he wouldn't be able to win a GOP primary.

"The bottom line is if I were to run a campaign that I could be proud of, and where I didn’t have to cozy up to the president and his positions or his behavior, I could not win in a Republican primary," Flake told MSNBC’s "Morning Joe." "That’s the bottom line."

…Flake signaled that his views as a dedicated conservative simply didn’t align any longer with those of many of his constituents — especially when it came to the issue of standing with Trump.

"It's not that you just have to be with the president on policy — you can’t question his behavior and still be a Republican in good standing, apparently, in a Republican primary," Flake said.

Flake, in his announcement Tuesday to not run, said on the Senate floor, "We must stop pretending that the conduct of some in our executive branch are normal."

"They are not normal," Flake said, adding that he would not be "complicit and silent."

He also took a ‘think of the children’ line in his Senate speech, which Fox News Greg Gutfeld torched as leftist strategy. It is tragic, senator—you were a Tea Partier. Now, you’re a quitter. Here’s his op-ed in The Washington Post, where he cited Army counsel Joseph Welch, who famously pushed back on Sen. Joseph McCarthy’s Army hearings with “have you no decency, sir.” It showed that McCarthy had overreached when he tried to take on the military and it was the beginning of the end of his political career, as Americans began to sour on McCarthyism:

The moral power of Welch’s words ended McCarthy’s rampage on American values, and effectively his career as well.

After Welch said his piece, the hearing room erupted in applause, those in attendance seemingly shocked by such bracing moral clarity in the face of a moral vandal. Someone had finally spoken up and said: Enough.

We face just such a time now. We have again forgotten who we are supposed to be.

There is a sickness in our system — and it is contagious.

How many more disgraceful public feuds with Gold Star families can we witness in silence before we ourselves are disgraced?

How many more times will we see moral ambiguity in the face of shocking bigotry and shrug it off?

How many more childish insults do we need to see hurled at a hostile foreign power before we acknowledge the senseless danger of it?

How much more damage to our democracy and to the institutions of American liberty do we need to witness in silence before we count ourselves as complicit in that damage?

It still doesn’t cover-up the fact that it looks like you're a quitter, Senator. The Senate is too gridlocked, so I quit. The partisan atmosphere is so toxic, so I quit. Trump is a bad, bad man, so I quit. I can’t win an election, so I quit. First, not faring well in a primary is not a forgone conclusion. There is a lot of time between now and Election Day 2018. Anything could’ve happened. Also, Flake voted with the Trump agenda the vast majority of the time. If Flake started out as a Tea Party conservative, his exit will peg him as a moderate who couldn’t hack it, but he’s not the only one.

For change to occur, our leaders must understand that there is not only strength in compromise, courage in conciliation and honor in consensus-building — but also a political reward for following these tenets. That reward will be real only if the people demonstrate their desire for politicians to come together after the planks in their respective party platforms do not prevail.

I certainly don’t have all the answers, and reversing the corrosive trend of winner-take-all politics will take time. But as I enter a new chapter in my life, I see a critical need to engender public support for the political center, for our democracy to flourish and to find solutions that unite rather than divide us.

I do not believe that, in the near term, the Senate can correct itself from within. It is by nature a political entity and, therefore, there must be a benefit to working across the aisle.

There are many causes for the dysfunction: strident partisanship, unyielding ideology, a corrosive system of campaign financing, gerrymandering of House districts, endless filibusters, holds on executive appointees in the Senate, dwindling social interaction between senators of opposing parties and a caucus system that promotes party unity at the expense of bipartisan consensus.

Many good people serve in Congress. They are patriotic, hard-working and devoted to the public good as they see it, but the institutional and cultural impediments to change frustrate the intentions of these well-meaning people as rarely before. It was not always thus.

So, the going gets tough, and these people just leave. Snowe said she wants to bolster the political center…by not being in the most prestigious legislative chamber to represent their supposed interests. Where is she by the way? For Bayh, yes—he didn’t have the best relationship with Obama, and he was more to the right on fiscal matters than Democrats, but two words apply to all of these people: I quit. I have never understood these ‘mic drop’ moments from the center. Okay—you’re leaving. So what? I don’t like how the party is going, then stay and change it. Fight for what you think is that principled conservative position. I may not agree with you always, but at least you stayed and fought for your ideals. Instead, it’s Trump sucks, I don’t like the atmosphere, and so I’m going to leave. That's what everyone else in the party sees. Or maybe he truly couldn't win, so he decided to make his exit by taking broadsides against the Trump administration.

Now that Flake is making his trip down desolation row, will this screw us in Arizona? As Sean Trende at Real Clear Politics wrote yesterday, it’s not an apocalyptic scenario at all. It remains the Democrats’ best pick-up opportunity, but while the state is becoming more bluish, for now—it’s still relatively red. He added that Flake’s exit increases the chances of a more establishment Republican doing better in a primary and then taking on Rep. Kyrsten Sinema, the presumptive Democratic candidate, in the general. Trende added that while Sinema has a moderate voting record, a plus in Arizona, she did describe herself as a “Prada socialist,” while in the state legislature. FiveThirtyEight made similar overtures, reiterating that it’s not a slam-dunk for Democrats now that Flake is leaving—and that his departure could be a good move for the GOP in the state:

Other, more establishment-friendly Republicans may jump into the race now that Flake is out. If one of these non-Ward candidates wins the primary, it probably means that Republicans caught a break with Flake retiring. He was very unpopular with Republicans, after all. And a new Republican candidate may be able to hold the Trump base (which Flake was struggling to do) without alienating voters in the center (as Ward may).

Other potential Republican candidates whose names had been buzzed about — Robert Graham and Jeff DeWit — are on good terms with Trump and are more conventional politicians than Ward. DeWit is the state treasurer, and Graham ran the Arizona Republican Party and got favorable reviews for his efforts to unite the emergent tea party forces with more establishment Republicans. Neither man is a polarizing figure in the state the way Ward is, and as Graham told FiveThirtyEight in September, GOP donors in Arizona have been clamoring for either of them to enter the race and unite establishment Republicans and far-right activists behind a single candidate. Dustin Stockton, Ward’s former campaign manager, told FiveThirtyEight that Rep. Martha McSally is also being talked about as a potential entrant to the race.

So, in all, we might have dodged a bullet. And yes, Flake’s base in the state was shaky on the verge of collapse. But I thought Trump could never win. I think a lot of people thought his candidacy could never be successful, but he fought and won. Moreover, it could have been interesting if Flake had just cooled off on the anti-Trump antics for a period of time to see how his approvals would have turned out. He has voted with the Trump White House the vast majority of the time. In a moment of clarity, Sen. Ted Cruz (R-TX) issued this statement to his Senate colleagues attacking Trump: shut up and do your jobs. Maybe there was still time to right the ship, maybe it was impossible—I don’t know. In fact, you’ll never know if you don’t make the effort. Regardless, it’s farewell, Flake.