Politico: Trump White House Is Getting Things Ready For A Second SCOTUS Vacancy 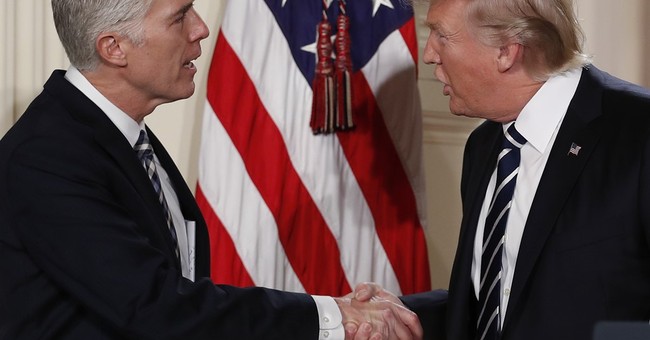 This morning Judge Neil Gorsuch was confirmed to the U.S. Supreme Court. For such a non-controversial figure, Gorsuch experienced the full might of the Democratic Party’s attack machine. Still sour at Senate Republicans blocking Merrick Garland, Obama’s first pick to fill the vacancy left by the late Antonin Scalia, through the Biden rule—the Left was determined to stop Gorsuch at all costs. Despite having broad support from across the spectrum in the legal scholar realm—Obama’s former solicitor general supported his nomination—and the highest rating from the American Bar Association, Democrats formed a united front to stop him. They had the votes to block Gorsuch through a procedural hurdle, denying Senate Republicans the 60 votes needed to invoke cloture and move to the final confirmation vote. As a result, Senate Republicans nuked the rules, allowing for Gorsuch to be confirmed by a simple majority. Not liking someone because a Republican president nominated him or her isn’t a good enough reason to block a judge. Democrats learned that the hard way.

Now, should a second vacancy occur, a) Republicans will not have as much trouble to confirm this person; and b) the composition of the Court could become more decidedly conservative. This is why it was probably best for the Democrats to keep their powder dry, but we’ve crossed that bridge. Even right now, the Trump White House is preparing to set the groundwork for that second vacancy and to fill as many as 100 vacancies in the federal court system. The rumor is that Justice Anthony Kennedy is set to retire shortly and that Gorsuch’s confirmation would be the signal that his seat would be in good hands. Apparently, both Trump and Kennedy’s children are creating this back channel of communication, as Don. Jr. and Kennedy’s son, Justin, know each other. Politico had more:

The White House has also closely monitored retirement chatter by tapping into the network of former Kennedy clerks, a group that includes Gorsuch himself. Some in the legal world viewed Gorsuch’s selection — he would be the first Supreme Court clerk to serve alongside a former boss — as an olive branch to Kennedy that, should he retire next, his seat would be in reliable presidential hands.

Those close to Trump’s judicial-selection process stress that they’re not pressuring Kennedy to hang up his robe, only seeking to put him at ease.

But as they wait for a decision they cannot control, White House officials have already set in motion plans to fill the more than 100 lower court vacancies, including more than 10 percent of the crucial seats on various U.S. Courts of Appeals, in a bid to tug America’s courts in a more conservative direction for decades to come.

The Trump playbook for those lower court picks is hidden in plain sight.

Trump took the unusual step on the campaign of producing a public list of 21 possible candidates for the Supreme Court. That pool of judicial talent — in particular, younger judges serving on state supreme courts — are now the front-runners to fill top federal court vacancies, according to three people involved in Trump’s judge-selection process.

While Democrats do not have the votes to block Trump nominees, they can withhold so-called “blue slips,” the century-old tradition of home-state senators approving judges representing their states. One Trump official said it’s possible that the White House could use holdover Obama appointees as bargaining chips for more speedily confirming Trump picks.

Republican and Democratic lawmakers alike are readying for the biggest fight if and when Kennedy retires.

One new name percolating at the highest levels of the Trump administration is Brett Kavanaugh, a 52-year-old who has already served a decade on the D.C. Court of Appeals.

That may not be an accident. He, too, is a former clerk of Justice Kennedy.

Democrats had their last tantrum over Gorsuch. There was simply no way that even moderates would allow for the Left to butcher the ascension of a qualified candidate, who is also respected by liberals, to be a victim of partisanship. While the margin for error for the 52-vote Senate Republican majority is slim, they also united to foil this unprecedented filibuster of Gorsuch. It wouldn’t shock me if Democrats bring up Garland again if that second vacancy opens up, but at least we have to votes to invoke cloture and get whoever it may be through the process. Conservatives might have a shot to alter the balance of the court towards a solid 5-4 (maybe 6-3) majority. The only annoying drawback is that the Left might rehash the tired line of The Federalist Society being some sort of secret society. But we’re not snowflakes. We’ll just bear and grin it since, well—we have the votes to ignore the Democrats' whining now.