Lindsey Graham: We Should Just Let Obamacare Collapse If We Can't Get A Solid Fix Through Reconciliation 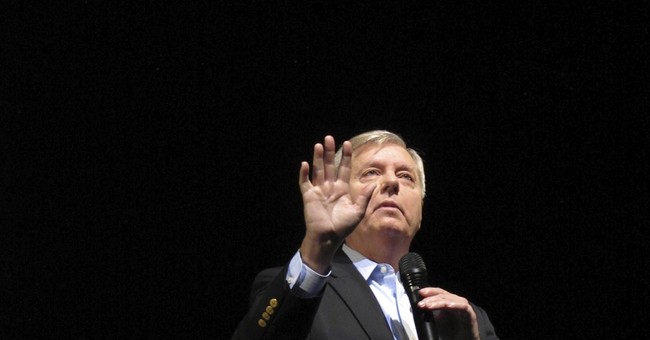 Well, the House GOP has taken a political consequences be damned position. The House will be voting on the American Health Care Act, the GOP replacement to Obamacare, next Thursday—though both Speaker Paul Ryan and President Trump admitted that changes would need to be made to ensure passage. The president has said he’s 100 percent behind this legislation, but you should read Guy’s deep dive into this development.

The Obamacare replacement offered by congressional Republicans has received a brutal reception. Democrats are uniformly against it, while the GOP is split. The lackluster CBO score prompted moderate GOP lawmakers to flee—and Sen. Tom Cotton (R-AR) warned that this bill doesn’t have the votes to pass the Senate. There are some Republican senators who refuse to support a bill if it touches the current funding formula for Medicaid expansion. And the things that conservatives want Republicans to do regarding health care reform, allowing insurance companies to compete across state lines, tort reform, cannot be included in the reconciliation process.

Sen. Lindsey Graham (R-SC) spoke with radio host Hugh Hewitt on Wednesday about his issues with the bill, namely that the three-phase approach, in which the GOP will make into law the areas they can’t touch with reconciliation, wouldn’t work. He noted that for provisions, like health insurance companies being able to compete across state lines, would need to get 60 votes to pass the Senate. Democrats aren’t going to help the GOP on health care, so the two succeeding phases are bound to fail. Graham said that we should just let the law collapse if the GOP couldn't get a solid bill using reconciliation, which drew disagreement from Hewitt. For conservatives, the fact that the GOP is haggling over Medicaid is frustrating since the expansion provision in Obamacare is one of the most expensive in the law. Graham also admitted that he could be miscalculating the political consequences for this wait and die strategy.

Hugh Hewitt: Now today, the AP is reporting, and I’ll read the quote. House Republicans are working on a companion to their bill replacing Obamacare. It’s a legislative second act that would ease cross-state sale of health insurance and limit jury awards for pain and suffering in malpractice lawsuits, closed quote. That’s actually fiction. That’s propaganda, because that takes 60 votes, and you’re not going to get it. I am curious if you agree with me that the House Republicans do not understand reconciliation, and that they can use tax policy to dis-incentivize bad behavior, and that it will pass muster with the parliamentarian?

Lindsey Graham: Yeah, I think this is the key point. I think this is what Senator Cotton’s trying to say. Reconciliation is a limited venue to make changes. It has boundaries, right? so if you have a three-step approach, reconciliation being the first step, and buying across state lines doesn’t fit into reconciliation, then any package coming from the House after reconciliation must get 60 votes. There’s no way the Democratic Party is going to vote for a concept that opens up health care to more competition and outside government control. That’s what this whole damn thing’s about to begin with, is that they believe that health care should be provided by the government. We believe you should have more choices. And I don’t see eight of them helping us get our, you know, get this thing done. That’s just not going to happen.

Hewitt: The vast majority of Republicans believe that people transitioning from Medicaid need help. I have a four square box – poor, not poor, young, not young, and I think the tax credits ought to go to the poor not young in overwhelming proportion and followed by the poor young, but mostly to the poor people to help them transition from Medicaid so we don’t create a poverty trap.

Hewitt: Rand Paul’s not going to buy that. I understand it. That’s fine. He’s down. Susan Collins isn’t going to buy any of this. She’s down. So we’ve got to get everybody else, right?

Hewitt: Good luck. We’ve got to get everybody else. Is that doable, Senator Graham, because this is the once in a lifetime…

Hewitt: We’re going to get killed.

Hewitt : We’ll get killed if we don’t repeal the medical device tax, the individual mandate. We’re going to get slaughtered.

Graham: Well, you will, and here’s how you will do it. Here’s what you’re going to get killed. If you pass a bill that is using the same process the Democrats did, you ignore every warning sign and you go through anyway, and you take CBO numbers and you just excuse everything the CBO said, if at the end of the day the 62 year old person in Greenville, South Carolina doesn’t get help from this bill, if their premiums don’t go down, that if Medicaid continues to explode and expand, then what good have you done? Here’s what I would suggest to the President. Keep working hard. I want to work with you. I want to get to yes. But if it doesn’t work, if we can’t get there by ourselves, let it collapse. It is collapsing. Obamacare is a nightmare for the country. Democrats are not going to lift a finger to help President Trump. I would do collapse and replace if you can’t get a good, solid fix to Obamacare using reconciliation.

Hewitt: I think you’re misjudging the political consequences of that strategy dramatically.