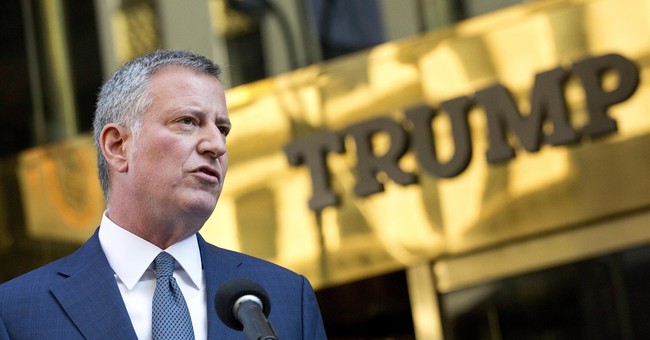 New York City Mayor Bill De Blasio is on the whine wagon about the 2016 election. The mayor called for the Electoral College to be dissolved since Clinton got over 2 million more votes, which means that this is very, very problematic for our democracy (via The Hill):

“Obviously we have a profound problem. We’ve never seen such a disconnect between the popular vote and the Electoral College vote in the history of this entire country," de Blasio, who backed Clinton, the Democratic nominee, said during a press conference.

"And this morning, I checked the numbers again, and Hillary Clinton’s up by 2.3 million votes. This is absolutely unprecedented, and I think it creates a huge question for our democracy. How is the president-elect going to proceed knowing that he had 2.3 million more people vote for his opponent?” de Blasio said.

When reporters asked if he thought it was time to get rid of the Electoral College, de Blasio responded, "Yes."

Forgetting the fact that we’re not a democracy; that our Founders didn’t want a majority-rule democracy; and our Constitution is a testament to the many safety mechanisms to ensure a safe, not an efficient, government—de Blasio perfectly captures the angst of the progressive Left whose bastions of power in the urban areas were overtaken by rural voters. Yes, an army of peasants crashed your party, drank your wine, and pissed in your pool. This is an election. Some times you lose. And because you lose, doesn’t mean you torch the Constitution in a tantrum. Progressives have shown themselves to be the biggest form of juvenile in American politics. Moreover, this is why the Electoral College is so good. It prevents the coastal elites, who view the rest of the nation with scorn and disgust from deciding the race. Urban areas, especially New York City, are not representative of the entire electorate. The Electoral College forces candidates to run national campaigns and build coalitions, which is key to creating a consensus and a mandate to govern. It’s all featured in this great Prager University video below. You just can’t win the presidency by just winning the cities (Clinton learned this the hard way), or winning the South, or just the West. You need to go everywhere. Swing states change—and sometimes the states that decide an election aren’t the ones we consider key.

In 2000, if Al Gore had won Arkansas, Tennessee, and West Virginia, he would’ve won the race, even with Bush winning Florida. His position on the Second Amendment hurt him. In Florida, his dithering with a response on a proposed airport, which was eventually rejected by the Clinton administration near the Everglades, saw thousands of disappointed environmental voters cast their ballots for Ralph Nader.

To this day, some on the Left can’t blame Clinton for her defeat. It was racism, misogyny, sexism, or the Electoral College. No. It was because Clinton was a terrible candidate, who ignored millions of voters, prompted millions of Obama supporters to flip their vote, which undercuts the racism talking point, and arrogantly felt that she would see record turnout with the Democratic base. None of that happened. She sucked. Get over it. You have 2018 and 2020 to reverse your epic losses at the federal and state level. I can guarantee that an effort to abolish the Electoral College will get you nowhere, but I’m not going to stop you from wasting your party’s time and money on this pie-in-the-sky project.