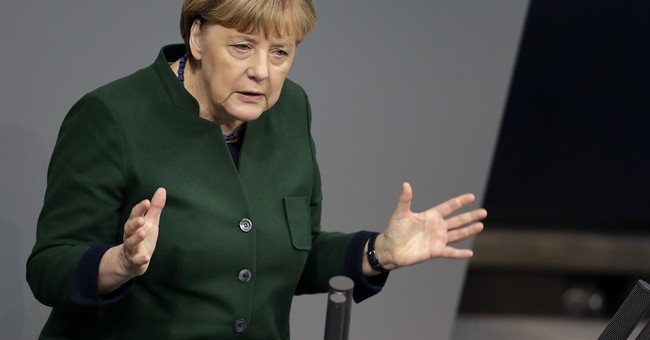 German Chancellor Angela Merkel opened the refugee floodgates in her country. The massive influx of refugees has been a controversial topic, especially since many tie it to spikes in crime. The massive amount of sexual assaults that occurred during the New Years Eve celebration in Cologne is usually referenced in these discussions. As Merkel announced that she would seek re-election to the German chancellorship, she faces sagging popularity numbers over her immigration policy. What better way to increase those numbers than by telling 100,000 migrants they have to go (via Express UK):

Mrs Merkel, whose decision to roll out the red carpet to migrants from across Africa and the Middle East spectacularly backfired, has taken an increasingly tough tone on immigration in recent months.

And in her toughest rhetoric yet the German leader told MPs from her party this week: ”The most important thing in the coming months is repatriation, repatriation and once more, repatriation.”

The stance marks an astonishing U-turn from the once pro-refugee Chancellor, who has been widely pilloried by critics at home and abroad for her decision to throw open Germany’s borders to millions of migrants.

Speaking at a conference of conservative MPs in Neumünster yesterday evening the Chancellor revealed that she expects 100,000 migrants to leave Germany this year, of which a third will be forcibly removed.

And employing a tough new form of rhetoric, she warned local regions to deport all migrants whose asylum applications are rejected, using force if necessary.

Merkel made her reelection campaign known on November 20. Right now, Europe is seeing a spike in populist support much like what has occurred here with President-elect Donald Trump.