Have No Fear, Trump Supporters–The White Nationalists Will Protect You At The Republican Convention 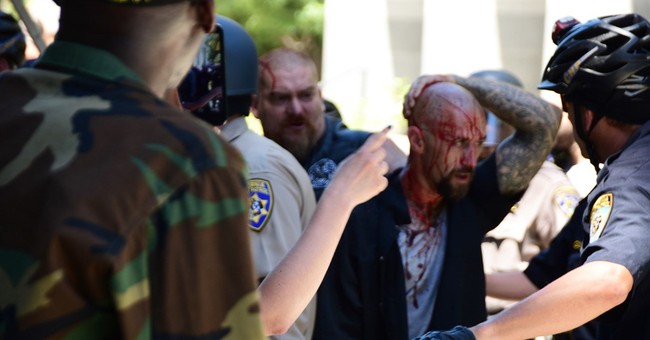 Leigh wrote about the city of Cleveland easing restrictions on where protestors can make their voices known during the Republican National Convention in July. As with any major party convention, expect the usual suspects—especially those on the Left. Trump rallies have been marred by violence from anti-Trump protestors, who have been caught beating and assaulting supporters of the presumptive Republican nominee. It’s a disgrace. It shouldn’t happen—and these progressive nutjobs should know that they’re only helping Trump by punching people in the face and setting American flags on fire. These aren’t protests; they’re riots. The Secret Service and local law enforcement will surely be around, but white nationalists said they would be there as well to make sure no one gets roughed up. This is the same group that was attacked in Sacramento by anarchists on the capitol grounds. Ten people were injured in the melee, a few of them were stabbed (via McClatchy):

A group of white nationalists and skinheads who held a rally in Sacramento over the weekend where at least five people were stabbed plans to show up at the Republican National Convention in Cleveland next month to “make sure that the Donald Trump supporters are defended.”

The violent clash at the California state Capitol accentuates concerns about the Republican National Convention, with political tensions high and thousands of pro- and anti-Trump protesters expected to descend on Cleveland.

“I think everybody is concerned about the potential for violence at the convention,” said Ryan Lenz, senior writer for the Southern Poverty Law Center, which tracks extremists and hate groups.

Sunday’s mayhem in Sacramento began as the white nationalist group Traditionalist Worker Party, along with the Golden State Skinheads, were setting up for a state Capitol rally the group characterized as a response to aggression against supporters of presumptive GOP presidential nominee Trump.

Traditionalist Worker Party spokesman Matt Parrott, who blamed the anti-fascists for the riot, said about 30 members of his group would come to Cleveland.

“We’re essentially just going to show up and make sure that the Donald Trump supporters are defended from the leftist thugs,” he said.

Parrott said he expected Cleveland police to largely prevent violence with heavy security, although “there might be a couple of isolated skirmishes.”

The publication added that the city’s spokesperson said there was a “robust plan” to make sure the convention was safe for everyone. I would say that it’s certainly the right of this group to travel freely and express their opinion, but I’m pretty sure that the police and Secret Service will have a tight lid on the situation outside. There’s no need to further incite these progressives, who already think this convention will be something akin to a Nazi rally at Nuremberg. Of course, it’s not. But we shouldn’t give liberals, or their allies in the media, a potential public relations disaster by the presence of white nationalist groups assembling near the convention. Let the police do their job. That’s what they’re there for. During this convention and afterwards, optics will be a huge thing. Right now, the Clintons are having a little issue with that concerning Hillary’s emails, their donations to their foundation, and a private meeting between Bill had Attorney General Loretta Lynch. Hillary is under FBI investigation. Let them make the mistakes. Having white nationalists at the RNC could invite disaster, folks. There’s no positive way to spin it.

The GOP Might Have Found Their Winning Midterm Message...Thanks to the CDC
Matt Vespa
Psaki Insists Biden Isn't Shutting Down America Again, But Says He Won't 'Take Options Off the Table'
Spencer Brown
Disease Expert Tells CNN: Most Masks Don't Really Work Against Wuhan Coronavirus
Katie Pavlich
These Tweets on How to do COVID Outreach to Black Americans from a White Liberal Cannot Be Real
Matt Vespa