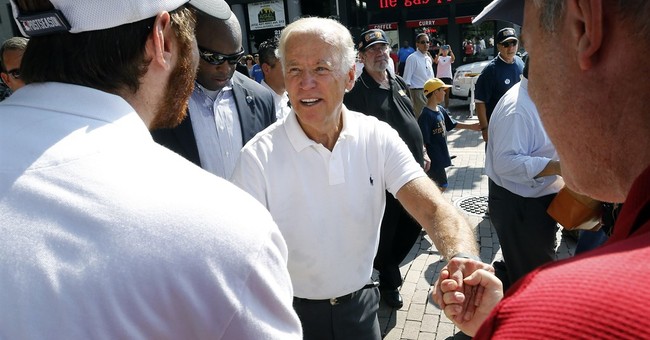 Speculation has mounted over the possibility of Vice President Joe Biden entering the race after his little New York trip last week. According to John Heilemann of Bloomberg, he met with a top Obama donor, gave a speech to back a minimum wage hike with Gov. Andrew Cuomo with some of the Big Apple’s most powerful unions in attendance, stood by Attorney General Loretta Lynch who announced an $80 million effort to get rape kits tested in a more timely manner, and of course, that emotional interview with Stephen Colbert. In fact, for columnists like David Brooks*, a New York Times Republican, this is what had him reevaluate the prospects of a Biden candidacy:

On the Democratic side, a Biden run would be more formidable than I thought last month. You need emotion to beat emotion. With Stephen Colbert he revealed a story and suggested a campaign that is moving, compelling and in tune with the moment.

Yet, let’s get back to this donor meeting:

The bundler in question was Robert Wolf: the former chairman and CEO of UBS Americas, a prodigious buck-raker on behalf of Barack Obama in two successive campaigns, a four-time appointee to economic panels in the Obama administration, and perhaps the only person in the American business community—and certainly the sole Wall Street potentate—with whom Obama during his time in office has developed a deep and genuine friendship. (The two are frequent golf partners, most recently last month on Martha's Vineyard, where they were part of a foursome with Larry David and White House senior adviser Valerie Jarrett's cousin Cyrus Walker.)

Having picked up scuttlebutt about a possible Biden-Wolf tete-a-tete on Friday, I phoned Wolf over the weekend to see if it was true. Wolf, whom I've known since he first backed Obama in early 2007, confirmed that the meeting had taken place. The topics they discussed, Wolf said, ranged from the reauthorization of the Export-Import Bank to the nation's crumbling infrastructure, a focus of Wolf's consulting firm, 32 Advisors. When I asked him if Biden had declared definitively that he was running, Wolf said no. Had Biden made a plea for Wolf's support? Wolf again said no—and pointed out he was supporting Clinton. Had Wolf come away with the impression that Biden was going to run? “If he doesn't know yet,” Wolf said coyly, “how would I?”

If Biden does decide to run, the benefits of landing Wolf would be many, some obvious and some subtle—but all perfectly clear to each party. First, having raised north of $500,000 for Obama in both 2008 and 2012, he could be a source of a great deal of campaign cash. Second, he could help Biden establish ties to Wall Street, where the V.P. has few. Third, he could be a valuable adviser on economic matters, where the priorities of the two are in sync. Fourth, Wolf's defection from the Clinton camp would be a major symbolic blow to her already reeling campaign. And fifth, given Wolf's closeness to Obama, the move would carry with it the widespread (and likely accurate) assumption that the president had blessed it.

Heilemann added that Team Biden might be aiming for a later entry date. They’re still waiting to see if this Hillary collapse continues into the fall, especially when the former first lady testifies in front of the Select House Committee On Benghazi on October 22. Moreover, his possible campaign can still meet the filing deadlines to have his name on the ballot in the early voting states, and allow his family to continue to reflect in private their loss of Beau Biden, who passed away from brain cancer in May. Nevertheless, Biden would miss the first Democratic debate on October 13, and the Florida Democratic Party convention on October 31 and Nov. 1.

There are still a lot of uncertainties, one of them being that 800 lb. elephant in the room, which is that Biden has run twice before and lost both times. He’s never done well in New Hampshire, and this focus of starting something in South Carolina may have some good buzz, but can that translate into votes–especially when Hillary Clinton, despite her sagging campaign, holds a 70-80 percent approval rating with black voters in the state? It’s a demographic Biden has to compete with seriously if he wishes to clinch that primary.

There seems to be enough support for Biden to at least mount a challenge, but it’s a question about whether the man has the “emotional fuel.”