See Ya! Walsh Drops Out Of Montana Senate Race 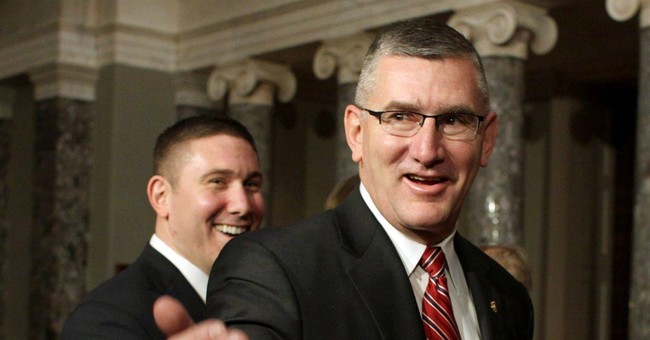 “I am ending my campaign so that I can focus on fulfilling the responsibility entrusted to me as your U.S. senator,” Walsh said in a statement to supporters. “You deserve someone who will always fight for Montana, and I will.”

The Montana Democratic Party now will choose a replacement for Walsh to appear on the Nov. 4 ballot, along with Republican Rep. Steve Daines and Libertarian Roger Roots.

The party has to select a new Senate candidate at a nominating convention by Aug. 20. About 175 delegates, including statewide and federal elected officials, county party committee leaders and the party executive board members, will pick the nominee.

Walsh was driving from Helena to Billings to personally tell his staff of his decision before it was publicly released.

Speculations that he would drop out of the race only intensified when he decided to cancel a fundraiser and a “Women for Walsh” event earlier this week. There was also a Vox Populi poll, which showed 63 percent of Montana residents were less likely to vote for him due to the plagiarism allegations. Oh, and his references to Post-Traumatic Stress Disorder (PTSD), which he said he had when he wrote the paper in question at the U.S. Army War College angered veterans.

So, now begins the process of replacing Mr. Walsh. The Washington Post listed three possible candidates, with the chance that former Governor Brian Schweitzer could throw his hat into the ring:

There's another name, too, that appears above: Schweitzer. The former governor had reportedly been considering a run for the presidency in 2016, until an article in the National Journal included some colorful quotes from Schweitzer about his views on identifying homosexual people. A Senate bid, which he had previously turned down, might now look more appealing for Schweitzer.

If Schweitzer decides to run, this could be a more competitive race–and one Republicans could lose. Schweitzer dominated his 2008 re-election bid, nabbing 65 percent of the vote. He also enjoyed a 60 percent approval rating one year before his second and final term ended.

Although, given his recent remarks, we shall see where that number stands if he decides to run.

UPDATE: It looks like Schweitzer might be staying true to his word from the beginning of this race and won't run.

As I said the other day, Brian Schweitzer isn't going to get in. Why? Because he knows what we know. Even @DSCC acknowledged his baggage

One piece of Schweitzer's "baggage" revolves around a political nonprofit, which had ties to two of then-Gov. Schweitzer's appointees. They shared the same address as the governor's campaign address and received contributions from a group with ties to Schweitzer( via Associated Press):

A politically active nonprofit group tied to two appointees of former Gov. Brian Schweitzer shared the governor's campaign address and received contributions from an organization that Schweitzer was involved in, even as the governor was bashing other such nonprofits for hiding from state disclosure laws.

The same post office box address is listed on Schweitzer's website as he considers a run for the U.S. Senate in 2014. If he gets in the race, Schweitzer would be considered the Democrats' best chance of keeping the seat being vacated by the retiring Sen. Max Baucus.

The group, called the Council for a Sustainable America, shut down in early 2010 and transferred $306,669 to a Washington, D.C.-based organization called the American Sustainability Project at about the same time as backlash increased in Montana against politically active groups registering as nonprofits with the Internal Revenue Service.

UPDATE II: Schweitzer is out.

I respectfully decline to seek the Senate nomination. Many thanks to John Walsh & I'll support whoever the next nominee turns out to be.

FLASHBACK: National Democrats knew there was "too much ammunition" to use against Schweitzer back in July of 2013 (via Politico):

Schweitzer roiled the Senate landscape when he told the Associated Press Saturday that he wants to stay in Montana rather than move to Washington, D.C. But his potential candidacy was also raising red flags within the party: After weeks of courting the 57-year-old Schweitzer, Democratic leaders reversed course in recent days.

Scrutinizing Schweitzer’s past, they concluded there was too much ammunition for Republicans to use against him in the campaign to replace the retiring veteran Democrat Max Baucus, according to a source familiar with the thinking of those leaders.

Schweitzer had been hit with a series of damaging stories about his ties to “secret money” and a nonprofit group run by former aides. But sources said the laundry list of opposition research went much deeper — and could have crippled a Schweitzer campaign for Senate. Moreover, there was fear that Schweitzer’s penchant for off-the-cuff remarks would hurt his ability to respond effectively to the barrage of GOP attacks.

Editor's note: It was previously stated that NRSC spokesman Brad Dayspring was referring to Schweitzer's alleged ties to the political nonprofit as his "baggage" in the first update. An NRSC staffer told me that wasn't the case, but said they did "comprehensive research" on Mr. Schweitzer. The post has been updated and corrected. We apologize for the error.