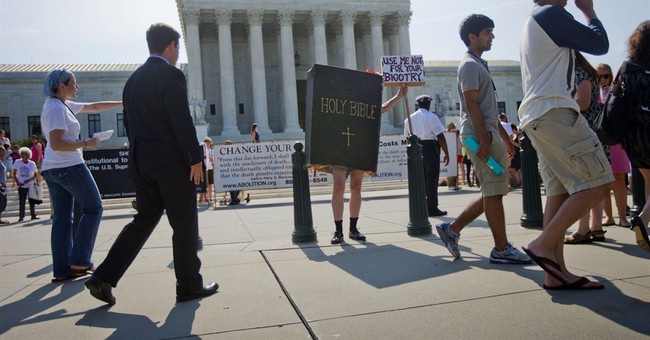 After the Supreme Court handed down a defeat for supporters of the contraceptive mandate, which gave religious exemptions to for-profit, “closely-held corporations;” Democrats are moving to amend the Religious Freedom Restoration Act (RFRA).

When it was passed in 1993, the bill almost had unanimous support; three votes were against it in the Senate. It seems that our more left-leaning members on the Hill seem to think that RFRA is being used haphazardly to benefit conservatives. As Megan McArdle of Bloomberg View wrote yesterday, RFRA isn’t a “blank check:”

The Religious Freedom Restoration Act is not a blank check to religious groups to do what they want. The law says that the religious belief must be sincerely held, and also that the government can burden the exercise of that belief if it has a compelling state interest that cannot easily be achieved in any other way. That's why no one has successfully started the Church of Not Paying Any Taxes, though people have been trying that dodge for years.

How can we tell if a belief is sincere?

Hobby Lobby closes its stores on Sundays and otherwise demonstrates a pretty deep commitment to fairly stringent Christian values, of which opposition to abortifacients is often a part. There will always be some gray area, of course, that allows people to claim special treatment for spurious beliefs, but the government has done a fair job over the decades of sorting out genuine beliefs from obvious attempts to dodge the law. Hobby Lobby seems to fall pretty squarely within the "sincere belief" camp.

Nevertheless, that hasn’t stopped Democrats from rushing to update RFRA to prevent further chipping away of the president’s signature domestic achievement (via Washington Examiner):

Congressional Democrats could pursue several options to limit the ruling. They could produce legislation removing corporations from the RFRA's protection. Sen. Dick Durbin, D-Ill., has proposed requiring public disclosure of all employers who deny their employees contraceptive coverage pursuant to the Hobby Lobby decision.

A liberal think tank, the Center for American Progress [CAP], released their own legislative proposal to place “reasonable restrictions on religious liberty protections” by adding clarifying language to the RFRA. “This section [referring to the existing statute] does not authorize exemptions that discriminate against, impose costs on, or otherwise harm others, including those who may belong to other religions and/or adhere to other beliefs.”

In his concurring opinion, Justice Anthony Kennedy argued the substance of the RFRA would be protected if government pursued a no-cost sharing mechanism for contraception coverage it created for religious organization and not-for-profits under the contraception mandate. Of the arrangement, Kennedy wrote: “That accommodation equally furthers the Government's interest but does not impinge on the plaintiff's religious beliefs.”

The Durbin blacklist is just insane, and the CAP amendment would be extraneous at best. Then again, even if the political goals aren’t met, Democrats can surely use this faux crusade to rake in vast amounts of campaign cash, demonstrate that they’re the ones protecting women’s health, and demonize Republicans through the usual disingenuous “war on women” talking points.