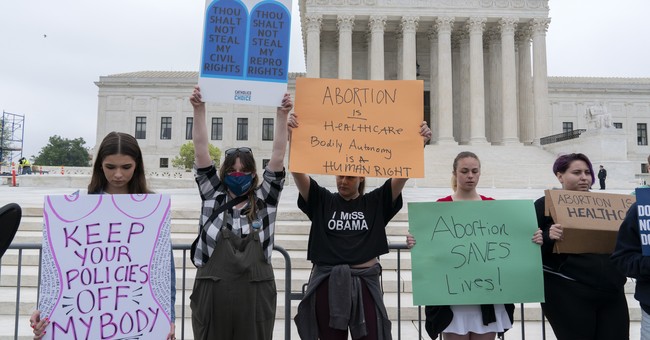 The National Association for the Advancement of Colored People (NAACP) released a statement Tuesday slamming a leaked draft opinion from an abortion case under review by the United States Supreme Court. In the leaked opinion, the Justices overturned Roe v. Wade.

In a statement shared on its website, the organization claimed that the Court has taken away voting rights, healthcare, and is now coming after abortion rights, which it dubbed “reproductive rights.”

"They've taken our voting rights, they've gone after our healthcare, and now they're coming after our reproductive rights. Which right are they going to overturn next? They've hijacked the courts to roll our nation back to a dangerous, dangerous era. Indeed, they are attacking the will of the majority with surgical precision. We feel the fear. We feel the anger. We've been here before, and there's no way we're ever going back. The fight is on. Our democracy and our rights are quite literally on the edge of cliff. This is not a moment for anyone to stay silent."

Spencer covered Monday evening that Politico released a 100-page opinion penned by Justice Samuel Alito, a George W. Bush appointee who's served on the Court since 2006, for the case Dobbs v. Jackson Women’s Health Organization, which surrounds the constitutionality of a 15-week abortion ban in Mississippi. The case was heard Dec. 1. It is unknown who leaked the the draft opinion to Politico.

The opinion reads, in part:

Abortion presents a profound moral question. The Constitution does not prohibit the citizens of each State from regulating or prohibiting abortion. Roe and Casey arrogated that authority. We now overrule those decisions and return that authority to the people and their elected representatives.

The opinion goes on to describe Roe and Planned Parenthood v. Casey as “egregiously” wrong, similar to what Mississippi Attorney General Lynn Fitch wrote in her amicus brief last summer before the Dobbs oral arguments.

Roe was egregiously wrong from the start. Its reasoning was exceptionally weak, and the decision has had damaging consequences. And far from bringing about a national settlement of the abortion issue, Roe and Casey have enflamed debate and deepened division.

Last summer, I reported how Fitch wrote in her amicus brief that Roe and Casey were "egregiously wrong" and should be overturned.

“Roe and Casey are egregiously wrong. The conclusion that abortion is a constitutional right has no basis in text, structure, history, or tradition,” Fitch wrote in the brief. “So the question becomes whether this Court should overrule those decisions. It should.”