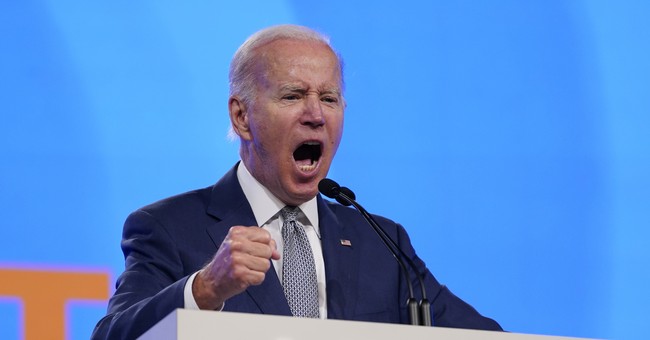 President Biden on Tuesday blamed Republicans in Congress for inflation, which reached a 40-year high of 8.6 percent in May, with food, shelter, and fuel indexes among the largest contributors, according to the Consumer Price Index report.

The president claimed during a speech to the American Federation of Labor and Congress of Industrial Organizations that his economic agenda would bring down costs but Republicans have blocked it.

“Under my plan for the economy we made extraordinary progress and put America in a position to tackle a worldwide problem that’s worse everywhere but here: inflation,” Biden said.

“The problem is, Republicans in Congress are doing everything they can to stop my plans to bring down costs on ordinary families,” the president added. “That’s why my plan is not finished, and the results aren’t finished either.”

Biden: "The problem [with inflation] is Republicans in Congress are doing everything they can to stop my plans to bring down the costs on ordinary families." pic.twitter.com/SLRjTEYnhj

When DNC Adviser Cedric Richmond tried to make the same argument as Biden on CNN, Jake Tapper reminded him Democrats control the Senate and the president's agenda would not have failed if it weren't for the two centrist Democrats.

"Yes, the Republicans are not participating or cooperating at all, but if you're blaming it on Republicans, then is it also not the fault of Kyrsten Sinema and Joe Manchin that there's inflation?" he asked.

"I'll just tell you that you have united Republican opposition, all 50 Republican senators are sitting on their hands and not doing anything to address these inflationary pressures, which there is a plan to deal with it," Richmond argued. "And we'll continue to talk and work with Senator Sinema and Manchin to continue to try to push the agenda. But when you have united opposition from the other party, this is what you get. And I think that's what Americans are so frustrated with, is congressional gridlock, when it's their lives that are being affected by it. And there's a plan, there's a bill, and we just urge Congress to act."

The Federal Reserve is expected to raise interest rates by at least half a percentage point on Wednesday to tamp down inflation.