The Taliban Is in Possession of US Weapons, But They Have Something Else That's Extremely Concerning 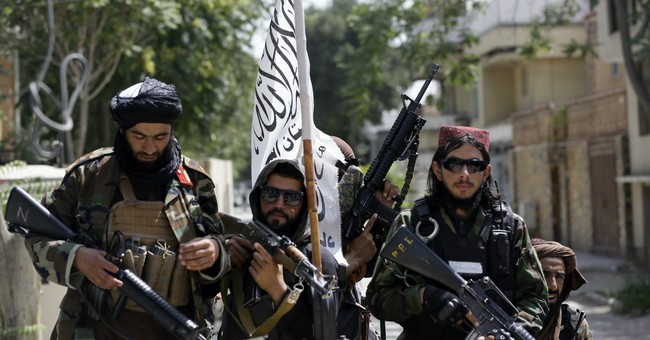 The United States left behind $85 billion worth of military equipment that the Taliban now has full control over.

Rep. Jim Banks knows precisely how dangerous that is—in 2014 he deployed to Afghanistan with the Navy and was assigned as a Foreign Military Sales Officer.

“My job was to help on the front end and the back end of acquiring American military equipment, to turn it over to the Afghans and train them on how to use it,” Banks said, speaking on the steps of the U.S Capitol on Tuesday.

“So you can imagine how shameful I find it that today all of that equipment has fallen into the hands of the Taliban. Because of the negligence of this administration and the hasty retreat that they led out of Afghanistan, they have left $85 billion worth of American equipment in the hands of our enemy, the Taliban. 75,000 vehicles, over 200 airplanes and helicopters, over 600,000 small arms and light weapons,” he continued.

Stunningly, Banks said the Taliban is now in possession of “more Black Hawk helicopters than 85 percent of the countries of the world.”

While the weapons are extremely concerning, Banks said the U.S. technology left behind will be devastating to the Afghan people in the hands of the Taliban.

“They have night vision goggles, body armor, and unbelievably, the Taliban now has biometric devices which have the fingerprints, eye scans and biographical information of all of the Afghans who helped us and were on our side over the last 20 years,” he explained.

And yet, Biden has no plan to get any of the weapons and technology back, Banks said.

“If any of these weapons or this military equipment is used to harm, injure, or kill an American now or any time in the future, the blood is on Joe Biden’s hands,” Banks said in closing.

VIDEO - Rep. Jim Banks: The Taliban Now Has More Black Hawk Helicopters than 85% of the Countries in the World https://t.co/Aw30buFm1X