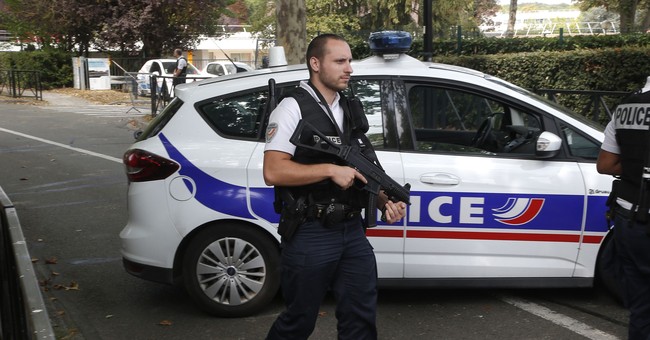 Three people were killed Thursday in a terror attack at the Notre Dame basilica in Nice, France. A terrorist entered the church around 9 a.m. local time, yelling “Allahu Akbar” and proceeded to behead at least one woman. There are conflicting reports as to whether a man was also beheaded in the church or stabbed to death. The third victim ran out of the church but “was hunted down and killed,” according to NBC.

"It seems that, according to the first findings of the police, the woman who was inside the church has been decapitated. For the other victims, we cannot say anything at the moment," Nice’s mayor, Christian Estrosi, told reporters.

“The suspected knife attacker was shot by police while being detained. He is on his way to hospital, he is alive,” Estrosi added.

In the Nice attack, the first victim - a woman in her seventies - was attacked after coming there early to pray and was found 'almost beheaded' close to the church font.

A 45-year-old sacristan, named locally as Vincent L, a father-of-two, was then attacked and also beheaded.

A third woman - described as of African origin and aged in her 30s - was then stabbed 'multiple times' and managed to flee to a bar across the street, where she died.

Police were called and arrived at 9.10am. They stormed the cathedral, shooting and arresting the attacker. (DailyMail)

Castex said "the attack was as cowardly as it was barbaric and puts the entire country in mourning.”

Other incidents occurred shortly afterward. In Avignon, about two hours from Nice, a gunman yelling "Allahu Akbar" threatened people on the streets before being shot dead by police. And at the French consulate in Saudi Arabia, a security guard was stabbed and wounded.

The incidents come on the heels of another terror attack in which a Chechen refugee decapitated a schoolteacher after he showed his class Charlie Hebdo caricatures of the Prophet Mohammad as part of a lesson on the freedom of expression during a civics class debate.

"Enough is enough," Estrosi said. "It's time now for France to exonerate itself from the laws of peace in order to definitively wipe out Islamo-fascism from our territory."

Update: Speaking outside the basilica where the attack took place, French President Emmanuel Macron declared, "It's very clear that it is France that is under attack."

“France will not give up on our values,” he added.

After Thursday's attacks, the president more than doubled the number of soldiers at schools and houses of worship, from 3,000 to 7,000.

This is a breaking news post and has been updated.