US Conducts Airstrikes Against Iranian-backed Militia in Iraq, Syria 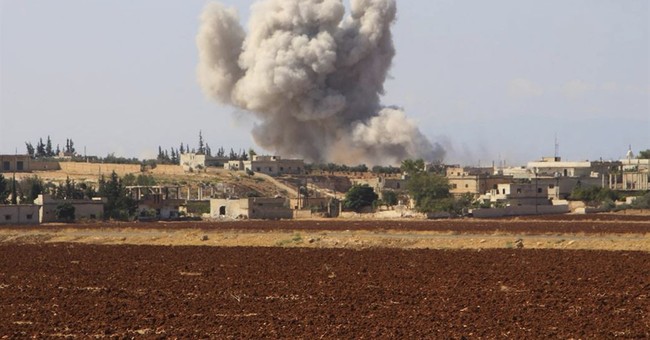 The U.S. military conducted airstrikes in Iraq and Syria on five facilities linked to an Iranian-backed militia. Sunday’s airstrikes came after the group was blamed for a rocket attack against a military compound that killed a U.S. defense contractor and injured four U.S. troops and two members of the Iraqi Security Forces.

According to Jonathan Hoffman, a spokesperson for the Pentagon, the military carried out “precision defensive strikes” against Kataeb Hezbollah, which “will degrade” the militia’s ability to conduct future attacks.

“Iran and their KH proxy forces must cease their attacks on U.S. and coalition forces, and respect Iraq’s sovereignty, to prevent additional defensive actions by U.S. forces,” Hoffman said.

Military forces said the attackers fired more than 30 rockets in Friday's assault — the 11th rocket attack on U.S. and Iraqi forces since late October, according to a U.S. defense official.

Five locations — including three Kataeb Hezbollah areas in Iraq and two in Syria — were targeted, Hoffman said in a statement. […]

Earlier this month, Pompeo blamed Iran for two separate rocket attacks on the Baghdad International Airport, on Dec. 9 and 11, where U.S. and Iraqi forces are located on the other side of the commercial airport.

Pompeo said if any Americans were harmed in the future, it would "be answered with a decisive U.S. response." (Fox News)

"Today's strikes against Iranian-backed groups in Iraq and Syria are a justified response to the killing of an American and the wounding of several American service members and Iraqis,” he said. “Tehran must stop attacking Americans or else face even graver consequences."

And Sen. Lindsey Graham (R-SC) said he was "glad" about the airstrikes.

"Very glad to see the US strike back against Iran/Hezbollah proxies in response to the attack on American service members in Iraq," he said on Twitter. "The only language Iran understands is force."

"We have already confirmed our rejection of any unilateral action by coalition forces or any other forces inside Iraq. We consider it a violation of Iraq's sovereignty and a dangerous escalation that threatens the security of Iraq and the region," the Iraqi prime minister said.

The Long War Journal reports that the militia groups has vowed to continue its attacks after the airstrikes.

“[W]e in the Hezbollah Brigades call on all popular and national military and security forces to prepare for a new chapter in the glorious pages of expelling the American enemy from our holy land," the group said on its website.

KH’s military commander, Abu Ahmad al Basri, was also quoted as saying that they are “awaiting orders, our forces are ready to destroy the bases of the American occupiers and crush their rotten heads.”

The airstrikes killed 19 fighters and injured 35 others, according to Jaafar al-Hussaini, a spokesman for the militia, reports The Washington Post.