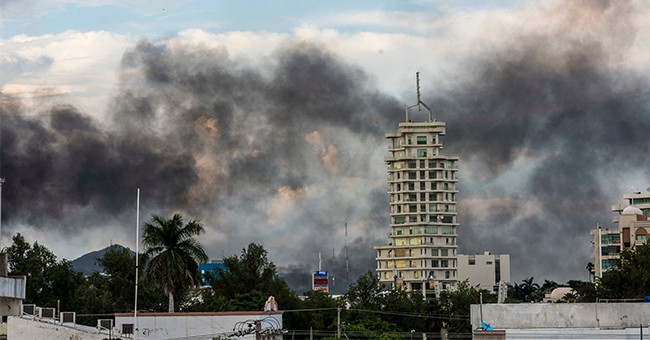 The Mexican government released El Chapo’s son after being completely overpowered by cartel members who set up burning vehicles as roadblocks into the city of Culiacan, roamed the streets with a .50-caliber machine gun bolted on one of their trucks, and surrounded soldiers. Amid the chaos, at least 20 prisoners also escaped into the streets.

Security Minister Alfonso Durazo said the reason they decided to release 28-year-old Ovidio Guzman Lopez, a leader of the Sinaloa cartel, was to protect life.

“The decision was taken to retreat from the house, without Guzman, to try to avoid more violence in the area and preserve the lives of our personnel and recover calm in the city,” Durazo told Reuters.

Durazo made a televised addressed, explaining that the army and national guard were conducting a routine patrol in a neighborhood in Culiacan when they were fired upon from a house.

Mexican authorities were able to get the upper hand and take control of the house, where they found Guzman among those inside.

Things quickly devolved into chaos, however, when cartel members “surrounded the house with a greater force” –overpowering authorities. While that was happening, “other groups carried out violent actions against citizens in various points of the city, generating a situation of panic,” Durazo said.

Indeed, photos from the city made it look like they were taken in a war-torn country.

A gun battle with high-caliber weapons rocked the streets of Culiacán, the capital of Mexico's Sinaloa state.

According to the Wall Street Journal, the government's decision may have had to do with authorities being taken hostage.

The former official said gunmen sent at least two videos to military commanders stationed in Culiacán, one showing members of a captured army patrol being held hostage, and another showing a soldier in uniform, bound and barefoot, being executed with a gunshot to the head on a street in the Sinaloan capital. It wasn’t clear if the soldier shot in the video was a hostage taken in Thursday’s surge of violence. (WSJ)

According to initial reports, at least two people died and 21 were injured during the fighting.

Falko Ernst, senior analyst for the International Crisis Group in Mexico, told Reuters Guzman’s release was “a dangerous precedent” –signaling to nonstate actors that the government was not in control and could be blackmailed.

Indeed, many observers agreed the situation was a national embarrassment for Mexico.

This is shocking, and an absolute disaster for the Mexican government:

It’s unclear whether the army managed to keep El Chapo’s son in custody — or whether it turned him
back over to the narcos. https://t.co/8O95nWGXQy

Mexican soldiers being overthrown by #Sinaloa cartel members at a toll booth in #Culiacán during today's shootouts. Soldiers had to shake hands with them. Who's really in charge in Mexico? pic.twitter.com/kXzHzbpj1y

This video purports to show Sinaloa cartel hitmen in a large convoy in Culiacán. Amazing the firepower they brought today. What a humiliation for Mexican government. https://t.co/ANxO9L0Hin

Despite Guzman's release, violence still plagued the city into the night.

WATCH: Despite the release of El Chapo's son, violence against citizens from the Sinaloa Cartel continues in #Culiacan, Mexico. pic.twitter.com/MUY1zeaQ7y

“It is clear that the government doesn’t have a clear idea of the military strength of criminal groups,” organized-crime expert Sergio Aguayo told the Journal. “You can see it in massacres that are constantly taking place, where different bands show that they have strong fire capacity and willingness to openly confront state forces. They no longer fear the state.”