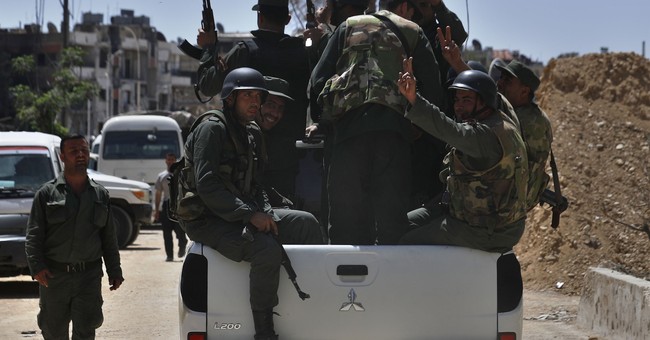 Russian and Syrian officials are reportedly blocking investigators from the scene of the chemical weapons attack in Douma, a watchdog group said Monday.

Based on “pending security issues,” officials from the two countries will not allow the Organization for the Prohibition of Chemical Weapons to enter the Syrian city where the suspected April 7 attack took place.

Instead, officials have offered up 22 people as witnesses for OPCW to interview.

Ahmet Uzumcu, Director-General of the group, hoped "all necessary arrangements will be made ... to allow the team to deploy to Douma as soon as possible," he told an executive council meeting Monday.

The Syrian government and Russian sympathizers have denied allegations that a chemical attack took place, with the latter even accusing Britain of staging the gas attack.

In response, the U.S., Britain, and France launched a strike against three of the regime’s chemical weapons facilities—a move Russian Deputy Foreign Minister Sergei Ryabkov suggested was the reason inspectors couldn’t get quick access to the city.

"As far as I understand, what is hampering a speedy resolution of this problem is the consequences of the illegal, unlawful military action that Great Britain and other countries conducted on Saturday," Ryabkov said.

British Prime Minister Theresa May accused Syrian and Russian officials of blocking access to the site of the attack in an attempt to cover up what happened.

“The Syrian regime has reportedly been attempting to conceal the evidence by searching evacuees from Douma to ensure samples are not being smuggled from this area, and a wider operation to conceal the facts of the attack is under way, supported by the Russians,” she said.

The U.S. also said it fears the site may have been tampered with.

“It is our understanding the Russians may have visited the attack site,” U.S. Ambassador Kenneth Ward said at an OPCW meeting on Monday, reports Reuters.

“It is our concern that they may have tampered with it with the intent of thwarting the efforts of the OPCW Fact-Finding Mission to conduct an effective investigation,” he added.

Russian Foreign Minister Sergei Lavrov denied the accusation, telling BBC he can “guarantee that Russia has not tampered with the site.”