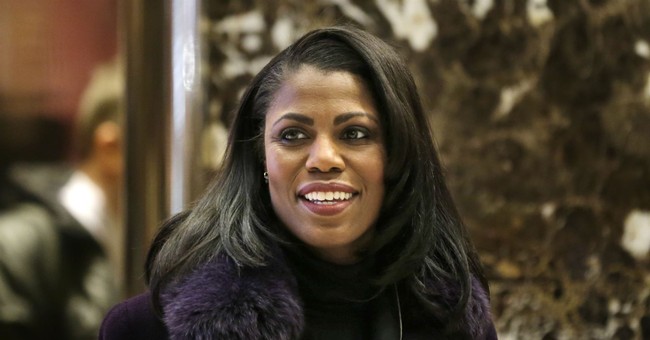 More than being “relentlessly loathsome," however, Morgan also claimed she propositioned him to have sex with her during “The Celebrity Apprentice.”

“I’ve met a lot of vile human beings in my life, from dictators and terrorists to sex abusers and wicked conmen,” he wrote in a column Tuesday. “But I’ve never met anyone quite so relentlessly loathsome as Omarosa; a vicious, duplicitous, lying, conniving, backstabbing piece of work.”

When Morgan turned her down, she accused him of being gay and was even threatening to physically attack him.

Omarosa is a reprehensible human being, prepared to offer sex to win a reality TV show and use the most vile homophobic slurs against rival contestants.

She did all this purely so it would bring her more airtime, and more attention. […]

When I grew angry at the tidal wave of verbal filth like this, using my then young sons as a weapon, she threatened me with physical violence: ‘‘Touch me, you’re going to get punched in the face.’

Morgan went on to argue that while he doesn’t believe President Trump is mentally unstable” as some have suggested, his decision to hire Omarosa “severely tested [his] faith.”

He warned to be prepared “for the ‘insider’ book, the docu series and the Lifetime movie” because she was
“watching, listening, plotting and almost certainly recording” during her time in the West Wing.

Recalling his experience with Omarosa on Fox News’s “Tucker Carlson Tonight” Tuesday, Carlson laughed in astonishment at Morgan’s account of her proposition.

“So this was your #MeToo moment,” the host joked.

.@piersmorgan: "I don't know why #DonaldTrump would have ever let [@OMAROSA] in there. She's already behaving exactly how I could have predicted she would behave...taking them all down, as, of course, she was going to." #Tucker https://t.co/IOmvt3v9kA pic.twitter.com/C2grot4O1R