Mulvaney Responds to Reports About John Kelly's Future at WH 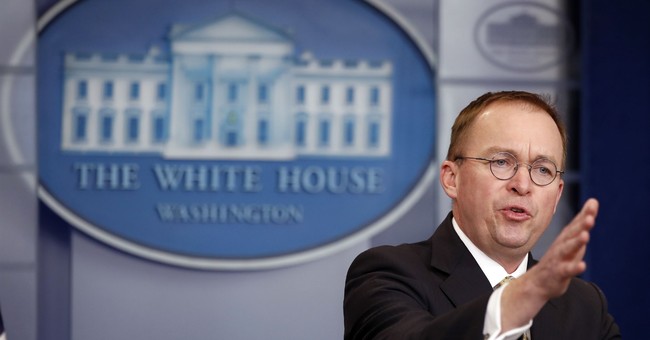 “Absolutely not,” he said on “Fox News Sunday.”

“I think all of these stories about replacing General Kelly are mostly being fed by people who are unhappy that they’ve lost access to the president under General Kelly’s leadership,” he added. “I'm extraordinarily pleased with the job the chief has been doing. … I think the president is as well. I think all this talk about the chief's departure is much ado about nothing.”

When photo evidence of one of Porter’s ex-wives with a bruised eye came out Mulvaney said that the staff secretary was gone “almost immediately.”

“As soon as Rob Porter was proven wrong, it was proven he was not telling the truth when the photos came out on Wednesday, he was gone almost immediately,” he said.

As for President Trump’s tweet over the weekend about how “live are being shattered and destroyed by a mere allegation,” Mulvaney said it wasn’t actually a reference to Porter but former Republican National Committee finance chairman and businessman Steve Wynn, who resigned following harassment allegations.

Wynn “has been accused and has been condemned without any due process,” Mulvaney said.

Mulvaney wasn’t the only senior White House official to take to the Sunday shows to defend Kelly—adviser Kellyanne Conway and director of legislative affairs Marc Short also said that there’s no indication Kelly is going anywhere.

"I spoke with the president last night about this very issue," she said ABC's "This Week," "and he wanted me to reemphasize to everyone, including this morning, that he has full confidence in his current chief of staff Gen. John Kelly, and that he is not actively searching for replacements."

Short also disputed reports that Kelly handed in his resignation over the matter.

"Gen. Kelly, in my mind, is an American hero," Short said on NBC’s “Meet the Press.” "There’s few families in America that have sacrificed more for our country. John Kelly knows that he serves at the pleasure of the president, and he will step aside as soon as — anytime the president doesn’t want him to be there. But John Kelly has not offered his resignation."

Both Short and Kelly said the allegations against Porter were surprising.

"When you've been working with somebody for a year, your first instinct is to say that doesn’t match up with the person I know inside our office,” Short said. “But that doesn’t mean that once you learn that actual extent of the allegations, that you have any tolerance for it. And Gen. Kelly had no tolerance for it."

Conway said Porter was a different person at the White House.

“This is not the Rob Porter any of us have worked with," she said, adding: "We are a nation of laws, we are a nation of due process, and all sides should be heard out. But you also can’t ignore what you see in front of you."