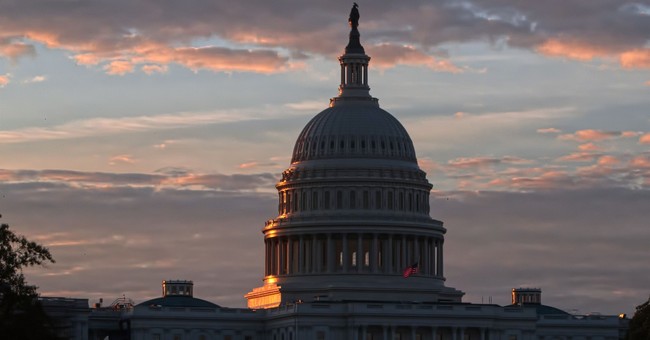 Voters have weighed in ahead of the looming government shutdown on who they will hold more responsible should lawmakers fail to pass a short-term funding bill.

According to a new Washington Post/ABC News poll, 48 percent of respondents said President Trump and the Republican Party would be to blame, compared to 28 percent who said Democrats would be responsible.

Eighteen percent of voters said both parties would be to blame.

Among independents, 46 percent pointed fingers at the GOP and President Trump, while 25 percent said Democrats would be to blame.

Congress must pass a funding bill by midnight on Friday to avoid a government shutdown.

The House passed a short-term funding bill Thursday, but Senate Democrats are opposed to the measure because it does not protect ‘Dreamers’—or those protected by the Obama-era Deferred Action for Childhood Arrivals program.

Not only do Senate Democrats seem unfazed by the prospect of a shutdown, some are boasting about it over not getting their way on immigration, leading the White House to name it the “Schumer Shutdown.”

Office of Management and Budget Director Mick Mulvaney slammed Democrats Friday for opposing the bill, which does not contain anything they are in opposition to.

“They don’t oppose anything in the bill, but they are opposing the bill,” Mulvaney said, referencing popular items in the legislation such as funding of the Children's Health Insurance Program (CHIP).

With a midnight deadline looming, the bill now moves to the Senate where the Republicans hold only a slender majority, making prospects for passage grim. To break a Democratic filibuster, the bill will need 60 votes. Republicans have a 51-49 majority in the Senate. (Fox News)

“Apparently they believe the issue of illegal immigration is more important than anything else, than the government services the American people depend on,” said Senate Majority Leader Mitch McConnell.

“What they’re simply trying to do is hold the government hostage, our military, kids' health, over something completely unrelated,” House Speaker Paul Ryan said on Fox News Friday.