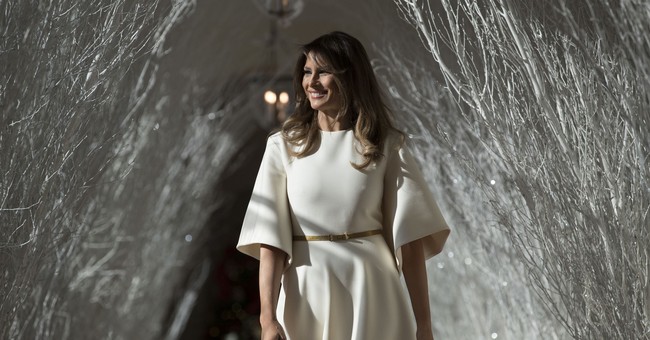 Newsweek published an incredibly misleading article about first lady Melania Trump on Tuesday, stating in the headline that she ordered the removal of a tree that Andrew Jackson planted on White House grounds in 1835.

While it's true the first lady did order partial removal of the tree, it was only after specialists determined it was a huge safety risk.

Specialists at the United States National Arboretum were brought in by the White House to assess the Magnolia grandiflora, as it is specifically termed. According to documents obtained exclusively by CNN, the tree must be removed, and quickly, despite efforts to preserve it over several decades. The documents read in part:

"The overall architecture and structure of the tree is greatly compromised and the tree is completely dependent on the artificial support," stated documents obtained by CNN. "Without the extensive cabling system, the tree would have fallen years ago. Presently, and very concerning, the cabling system is failing on the east trunk, as a cable has pulled through the very thin layer of wood that remains. It is difficult to predict when and how many more will fail." (CNN)

“Mrs. Trump personally reviewed the reports from the United States National Arboretum and spoke at length with her staff about exploring every option before making the decision to remove a portion of the magnolia tree,” Stephanie Grisham, a spokeswoman for the first lady, told CNN. “After reviewing the reports, she trusted that every effort had been made to preserve the historic tree and was concerned about the safety of visitors and members of the press, who are often standing right in front of the tree during Marine One lifts.”

The first lady even requested that wood from the tree be preserved and seedlings be made available if there's an opportunity in the future to plant a new Magnolia in the same location, but you wouldn't have guessed her concern for the tree based on Newsweek's headline.

Grisham slammed the news outlet for its extreme bias in the story.

“Newsweek's bias and disdain for the First Lady and our administration was on full display when they actively chose to use a false headline instead of practicing responsible journalism. This is why Americans' trust and confidence in mass media continues to fall,” she told Fox News.

“They either find something to attack him on or they just make it up,” Gainor told Fox News. “Remember, Newsweek sold several years ago for $1. It appears the buyers were cheated.”

But it's not just conservatives upset about the tweet. Huffington Post reporter Yashar Ali said "there's no excuse" for the headline, calling it "another BS Newsweek tweet."