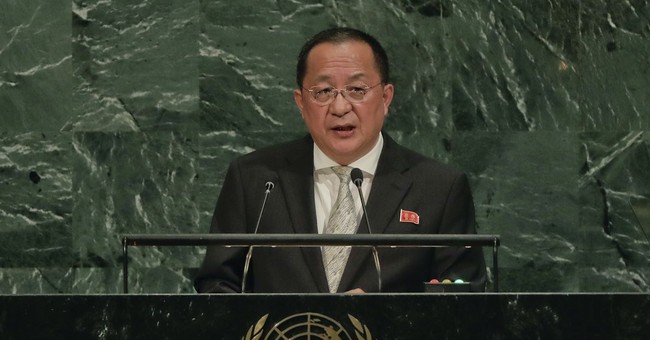 The president tweeted a warning Saturday to Pyongyang after Ri Yong Ho spoke to the United Nations General Assembly.

"Just heard Foreign Minister of North Korea speak at U.N.," he said. "If he echoes thoughts of Little Rocket Man, they won't be around much longer!"

"Due to his lacking of basic common knowledge and proper sentiment, he tried to insult the supreme dignity of my country by referring it to a rocket," he said. "By doing so however, he committed an irreversible mistake of making our rocket's visit to the entire U.S. mainland inevitable all the more."

The foreign minister also tried to claim that the use of nuclear weapons wasn’t the country’s first option.

"The Democratic People's Republic of Korea is a responsible nuclear weapons state," he said. "We will take preventative measures by merciless preemptive action unless the U.S. and its vessel forces show any sign of operating a decapitating operation on our headquarters or military attack against our country. However, we do not have any intention at all to use or threaten to use nuclear weapons against the countries that do not join in the U.S. military actions against the DPRK."

Saturday’s tweet wasn’t the president’s first warning to Pyongyang. During his speech before the UN General Assembly last week Trump said if the U.S. was forced to defend itself or its allies there will be “no choice but to totally destroy North Korea.”