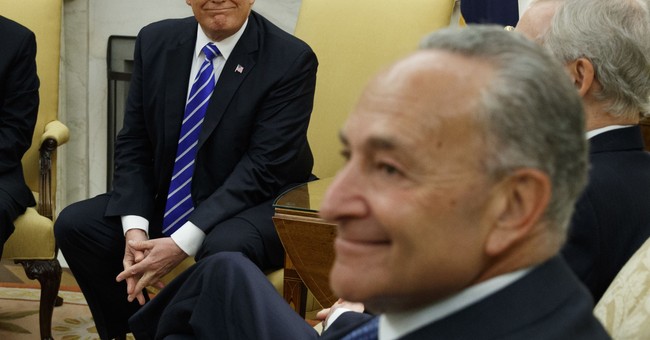 While some Republican lawmakers bristled at the deal President Trump cut with Democrats over government spending and the debt ceiling and are growing increasingly agitated at his efforts to reach across the aisle in the House and Senate, voters think it’s a great move.

According to a new Rasmussen poll, 66 percent of likely U.S. voters believe it’s good for the country for Trump to reach out to Democrats in an effort to advance his agenda. Only 13 percent said that bipartisanship is bad for the U.S., while 21 percent were undecided.

The view that Trump should rely on congressional Republicans to advance his agenda was not terribly popular, with only 19 percent of respondents agreeing. In April, 29 percent of likely voters believed the president should count on congressional Republicans. Interestingly, more people now believe Trump should turn more to Democrats for help (65 percent) than those who felt this way five months ago (58 percent). Sixteen percent were undecided.

Seventy-two percent of Republicans were pleased Trump was working with congressional Democrats while 62 percent of Democrats said the same.

In addition to the president's recent deal with Democrats, he also hosted a bipartisan dinner meeting Tuesday to discuss tax reform. The Democrats in attendance all spoke highly of the meeting, with Democratic Sen. Heidi Heitkamp saying she found the meeting "encouraging" and hopes "these bipartisan discussions continue."