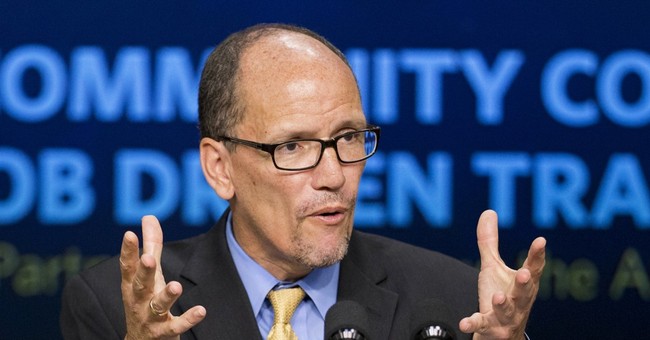 Democratic National Committee Chairman Tom Perez took Rep. Jason Chaffetz to task for saying that Americans are going to have to make tough choices when it comes to their spending.

“Rep. Jason Chaffetz is a shameless hypocrite,” Perez said in statement about the Utah Republican’s remark.

“He makes a six-figure taxpayer salary, has taxpayer subsidized healthcare, and he still thinks working Americans should be forced to choose between health insurance or owning a telephone.”

Chaffetz was not saying Americans should choose between owning a phone and healthcare, however. He said, specifically, that “rather than getting a new iPhone that they just love and they want to spend hundreds of dollars on, maybe they should invest in their own healthcare."

His point being, of course, that Americans may have to prioritize spending, which may mean giving up some of the luxury items in their lives.

He later clarified on Fox News: “What we’re trying to say, and maybe I didn’t say it as smoothly as I possibly could, but people need to make a conscious choice, and I believe in self-reliance.”

“And they’re going to have to make those decisions. We want people to have access to an affordable healthcare product."

Perez’s statement went on to slam the GOP’s replacement plan as a “death sentence” for many Americans.

“It’s no wonder why Republicans kept their plan hidden for so long,” Perez said. "It’s also glaringly obvious why they’re so desperate to ram it through Congress — they don’t want the public to find out what’s in it."

“If passed, this plan will throw millions of Americans off their healthcare and make it more expensive for millions more, especially seniors who will see cuts to Medicaid and increased premiums. For many Americans, it’s a death sentence.”

The irony of Perez’s claim is apparently lost on him. It was the Democrats who rammed Obamacare through Congress, with Rep. Nancy Pelosi infamously saying “we have to pass the bill so you can find out what is in it, away from the fog of the controversy. ”