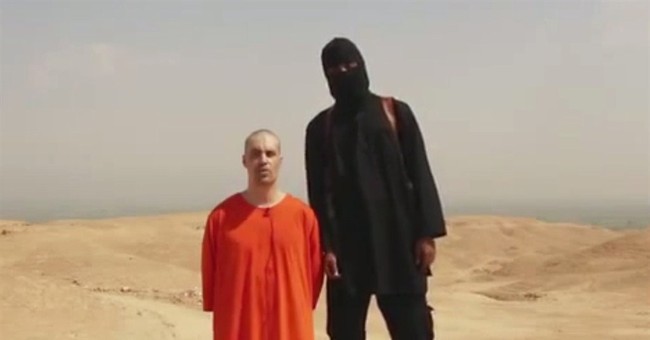 Comey would not identify the executioner’s nationality or identity to the media, though you’ll remember he spoke with a British accent in the videos.

The man, dubbed ‘Jihadi John,’ is one of four British jihadis known as the ‘Beatles’ that are currently holding hostages in Syria.

The Daily Mail has more details:

Hammond, who just ten days ago admitted special forces didn't know where the Islamic terror group was holding its British hostages, said the investigation into tracking down the killer with the British accent was 'narrowing down the field'.

Speaking to American television network CNN at the United Nations summit in New York, Mr Hammond said: 'We are getting warm, we are working on all the leads.

'There's a big investigation and we are getting warm. We're narrowing down the field, but I don't want to say any more at this stage.' […]

The US Senate has also offered a £6 million reward to anyone providing information that could lead to the capture of Jihadi John.

A team of more than a dozen US investigators from an FBI Joint Terrorism Task Force flew to the UK, where they are working with MI5 and anti-terrorist officers from the Metropolitan Police Force to identify the man.

It is believed family members of Jihadi John have been interviewed by Met officers and an FBI agent.

The source said Jihadi John was known to the security services even before he went to Syria, but had been regarded as a 'low-level player'.

Comey also said that the agency believes ISIS is ‘looking to try to do something in the U.S.,’ but went on to say he didn’t believe the group is capable of a complex or sophisticated attack at the moment.