Poll: Proud to Be an American? Forty-Four Percent Say No 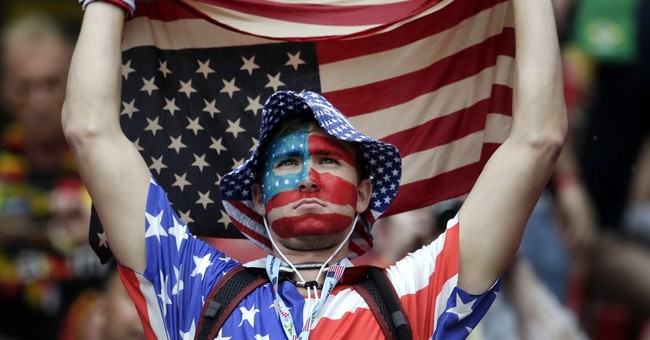 It seems the patriotism and unity the nation experienced in the aftermath of 9/11 has waned—and quite considerably, according to a recent Pew poll.

[A]n exhaustive new Pew poll shows that actual patriotism is in the dumps. An amazing 44 percent of all respondents said they didn’t often feel proud to be American. Only 28 percent said that America was the greatest nation on earth.

Not surprisingly, there’s a strong split on a partisan level, with Democrats more likely to say they are less proud to be an American.

Pew divided their sample into different categories across the left-right political spectrum. When asked if respondents “often feel proud to be American,” a majority of strong liberals, 60 percent, said no. The only group that solidly agreed with the statement was conservatives, ranging from 72 percent to 81 percent. About half of the respondents in the middle of the spectrum – essentially libertarians to socially conservative fiscal liberals – said they were proud to be American.

This isn’t just another eye-opening poll, however. What Pew has found is critically important for the direction of this country. As Fox News’ Chris Stirewalt asks: “how do you unite people to save the country if they’re not invested in its success?”

It’s not that the 44 percent who aren’t proud are all moving to Costa Rica, it’s that they feel less obliged to do the hard work necessary to make a system this demanding work. Politicians and public figures who intentionally exploit and deepen divisions and resentments are doing more than just creating gridlock, they’re undercutting the very idea that has lit the lamp of America’s greatness for nearly three centuries.

I for one would not be opposed to having the 44 percent who aren’t proud to be American move to Costa Rica, or anywhere else for that matter. Despite the gridlock, scandals, and crises this country is currently facing, we are still the greatest nation on earth, period.