Tax Revenues for Colorado Marijuana Sales Could Go 'Up in Smoke' 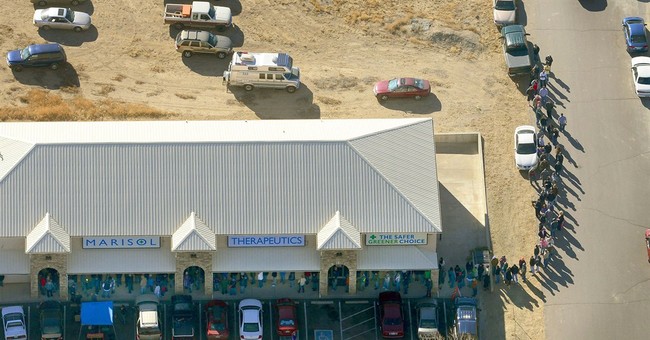 That’s right. The $40 million in expected tax revenue Colorado was hoping to collect may just ‘go up in smoke,’ Fox News reports, because banks and credit card companies are, well, complying with federal law.

“So far Colorado has not been able to come up with a solution to the banking problem,” Balmer said, reports Fox News. “The vast majority of sales will not be accounted for.”

"You don't want just huge amounts of cash in these places," Holder said in a speech at the University of Virginia, reports Fox News. "They want to be able to use the banking system. And so we will be issuing some regulations I think very soon to deal with that issue."

In the meantime, however, keeping track of sales is nearly impossible.

Businesses have no bank statements to confirm revenue or deposits, and many have expressed concern about the robbery risk associated with handling large amounts of cash. Some have set up limited liability corporations to create one-degree of separation to try to open bank accounts, but if banks know about the arrangement, they often balk, according to Balmer.

And they often can tell where the greenbacks come from.

“The large cash deposits smell like marijuana, so some of the businesses are spraying the cash with room freshener or perfume to hide the marijuana smell,” Balmer said. “The banks are even more suspicious when they have a person trying to deposit a large cash deposit that smells like perfume.”

Without accurate financial records, licensed businesses are expected to keep detailed records for the Department of Revenue, which is subject to inspection. There was also a tool launched on Jan. 1 that tracks inventory from 'seed to sale.'

“The majority of our marijuana retailers are trying to be honest,” Balmer said, Fox News reports. “But this is the Wild West and nobody really knows how to be lawful because this still violates federal law.”