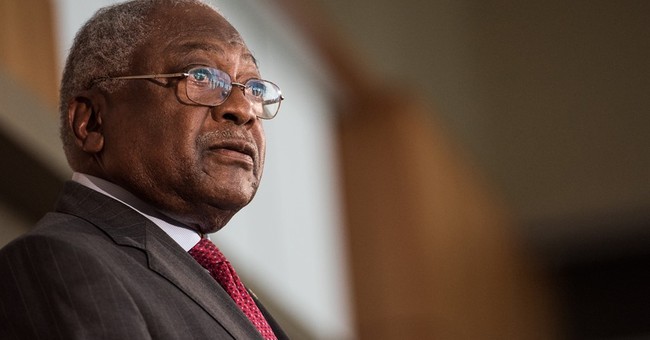 House Majority Whip James Clyburn (D-SC) claimed that President Trump and his family were “the greatest threats to democracy of my lifetime,” in an interview with NBC Tuesday. He also drew a comparison between Hitler and the Trump administration.

“I think it’s time for the Congress — House and Senate — to grow spines, and do what is necessary to protect this democracy,” he told NBC. “This man and his family are the greatest threats to democracy of my lifetime.”

When asked by NBC if he had seen a political climate like the present one he said he’d studied similar ones and appeared to compare the Trump administration to Hitler’s takeover of Germany.

"Adolf Hitler was elected chancellor of Germany,” he said. “And he went about the business of discrediting institutions to the point that people bought into it. Nobody would have believed it now. But swastikas hung in churches throughout Germany. We had better be very careful.”

On the prospect of impeaching President Trump, Clyburn encouraged a thorough investigation from the House committees.

This is not the first time Clyburn has compared Trump’s rise to that of Hitler and Nazi Germany.

Last January he told CNN’s Don Lemon that the political climate was comparable to that of Germany in 1934.

"I can only equate one period of time with what we are experiencing now, and that is what was going on in Germany around 1934 right after the 1932 elections when Adolf Hitler was elected chancellor," he said at the time.

"When I see, and hear, and experience what’s going on in the country today, I think back to that time. And I really believe that we as Americans had better get a handle on things. If we don’t, we could very well see ourselves going the way of Germany," he added.

Lemon pushed back on equating Trump to Adolf Hitler.