Trump Says Mueller Probe Drove a 'Wedge' Between US and Russia 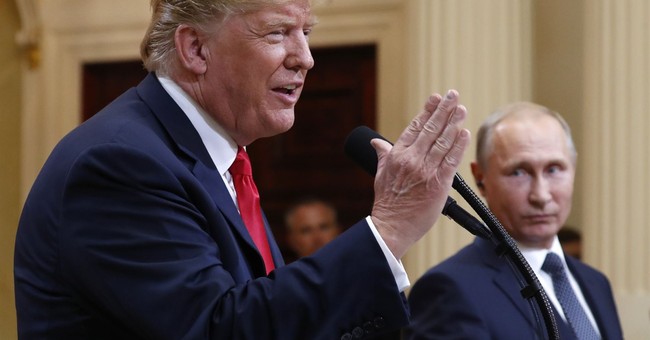 President Trump defended the remarks he made at a summit with Russian president Vladimir Putin Monday, telling Fox’s Sean Hannity that “it was a good meeting” and referring to the Mueller probe into Russian interference into the 2016 presidential election as a “wedge” between the U.S. and Russia.

"Maybe we’ve just knocked down that wedge, but it has driven a wedge and President Putin said that," Trump told Hannity Monday evening. "One of the early things he said when we started was, 'It's really a shame, because we could do so much good' ... And they drove a phony wedge, it's a phony witch hunt, rigged deal with guys like [FBI agent] Peter Strzok and [former FBI Director] James Comey and [former FBI Deputy Director Andrew] McCabe ... and you can imagine who else. It's a real shame."

President @realDonaldTrump on Mueller probe: "It's driven a wedge between us and Russia." #Hannity https://t.co/yDQGEHb5F2 pic.twitter.com/di6MMJ5U8x

Trump emphasized that he and Putin had a good meeting.

"It was just the two of us and interpreters," he said, "and at the end of this meeting, I think we really came to a lot of good conclusions."

"I think we’re doing really well with Russia as of today,” he continued. “I thought we were doing horribly before today ... I think we really had a potential problem."

Trump has been widely criticized, by both Democratic and GOP leaders, for the meeting with Putin and for his remarks during the press conference downplaying Russian interference.

He tweeted a defense of his friendly treatment of Putin earlier Monday as well.

As I said today and many times before, “I have GREAT confidence in MY intelligence people.” However, I also recognize that in order to build a brighter future, we cannot exclusively focus on the past – as the world’s two largest nuclear powers, we must get along! #HELSINKI2018