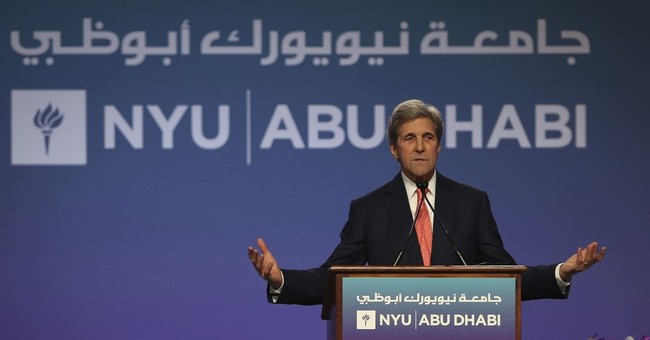 Former Secretary of State John Kerry claimed that civil discourse is facing threats all over the world and singled out the U.S. as having “accusatory” and “bombastic” politics during a commencement address he gave overseas Sunday at NYU Abu Dhabi.

“True civil discourse is also under threat all around the planet, eroding rights alongside trust,” Kerry told those gathered. “Certainly in my country, our politics has become almost all accusatory and all bombastic.”

He said people often “leap to a conclusion. I’m wrong, you’re right. I’m right, you’re wrong, back and forth, without any intervening exchange.”

“And in the end,” he said, “my friends, we’re left asking: How in a civil society can you make important decisions, that build a consensus of support, if you can’t even agree on what the facts are?”

In what some took as criticism of Trump’s decision to leave the Paris climate agreement, Kerry remarked that the U.S. “needs to build partnerships and cannot turn its back on the world.”

“We won’t win, any of us, ultimately, by retreating within our borders, by focusing on our own nations only, or by going it alone,” Kerry emphasized.

The Associated Press reports that “NYU Abu Dhabi invited reporters to cover Kerry’s speech, then just before the ceremony said journalists from The Associated Press and others could not film his full remarks. They said the school would offer video that it would editorially control after the event.”

According to AP, NYU Abu Dhabi has been criticized in the past for controlling speech as they try to balance American ideas in the United Arab Emirates, which has strict rules that control speech.

Despite the restriction on recording, the school did allow an AP photographer and writer to attend Kerry’s speech.