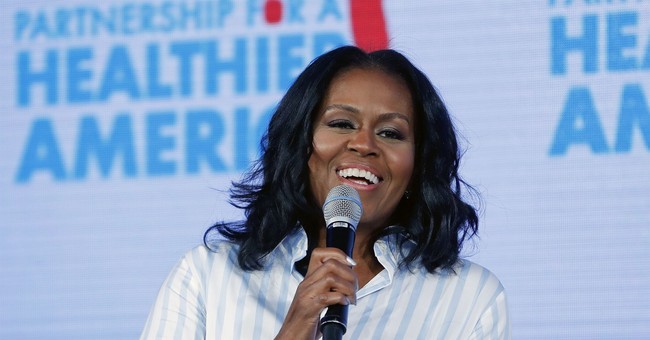 Former first lady Michelle Obama called her husband “the good parent” during his presidency and compared Trump’s presidency to having “the other parent” who feels “fun for now” but makes irresponsible decisions. Obama also weighed in on why she thought Hillary Clinton lost the 2016 election during a Thursday night interview at a Simmons leadership conference in Boston.

“I think what we see is what happens when we take things for granted,” she told Simmons President Helen Drinan. “For the eight years Barack was president, it was like having the ‘good parent’ at home. The responsible parent, the one who told you to eat your carrots and go to bed on time.”

“And now we have the other parent,” she continued. “We thought it’d feel fun, maybe it feels fun for now because we can eat candy all day and stay up late, and not follow the rules.”

Obama went on to discuss “what happened” in the 2016 election, speculating that “people weren’t comfortable voting for a woman sadly.”

“We need to own that reality, for me that’s the deeper question for us today as women, what happened?” She emphasized. “What’s going on inside of us where we’re still afraid to embrace a different vision of leadership because to me that’s what that says. It says that the best qualified candidate in this last race was a woman and she wasn’t perfect but she was way more perfect than many of the alternatives.”

She also dismissed speculation that she would be seeking the office of the president, saying she’s never “had the passion for politics.”

"I think people should be less disheartened that me and Oprah don't want to run,” she concluded, “and more disheartened by the fact that Hillary Clinton, probably the most qualified person to ever seek the office of the presidency, lost. She lost."