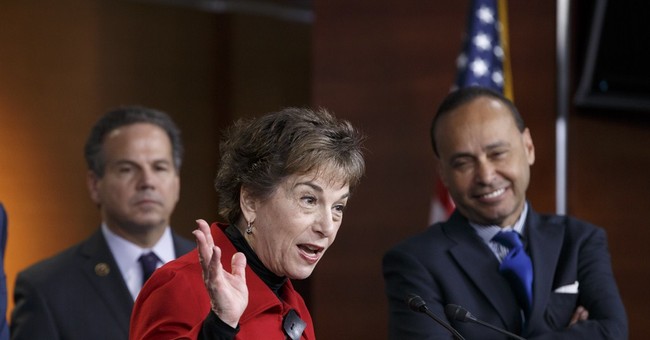 Rep. Jan Schakowsky (D-IL) released a statement Thursday denouncing Nation of Islam leader Louis Farrakhan, who is openly anti-Semitic. Her denouncement follows an outcry over Democrats’ failure to renounce past ties with Farrakhan after he went on an anti-Semitic rant last week, saying Jews “were responsible for all of this filth and degenerate behavior that Hollywood is putting out, turning men into women and women into men."

“I am appalled by the statements of Louis Farrakhan and condemn him for once again fanning the flames of anti-Semitism,” Schakowsky said in a statement. “At a time where the Anti-Defamation League tells us that anti-Semitic incidents rose by 57% last year, those remarks are particularly dangerous. There should be no place in our society for those words.”

However, she qualified her statement by defending seven of her colleagues who have past ties with Farrakhan and have yet to condemn him.

“At the same time, I condemn those who are trying to score political points over this issue,” she said. “My colleagues who are being attacked by the Republican Jewish Council have spent a lifetime opposing anti-Semitism, homophobia, misogyny, and racism. I know that they will continue working against discrimination wherever and whenever it occurs, and I will work with them to renew and expand those efforts.”

The Republican Jewish Council called for the resignations of seven Democrats who have not renounced Farrakhan despite direct ties to him including attending meetings and dinners with him, something a recent Daily Caller report documented.

“Seven long-serving Democrats have close ties with Louis Farrakhan. Each of them should resign,” they said in a statement Thursday. “They include former Nation of Islam employee, Congressman Keith Ellison, who is Deputy Chair of the DNC. Ellison has tried to excuse his 2013 meeting with Farrakhan, while ignoring his more recent meeting with the NOI leader in Farrakhan’s hotel room, in 2015.”

“At least six other Democrats are known to have embraced Farrakhan,” they continue. “These members of Congress - Maxine Waters, Barbara Lee, Danny Davis, Andre Carson, Gregory Meeks, and Al Green - have all, while in office, sat down with Farrakhan for personal meetings.”

“Anti-Semitism is unacceptable,” they emphasize. “Farrakhan is the moral equivalent of a leader of the KKK. If it was discovered that members of Congress had met with the leader of the KKK, they would need to resign. In this case, for meeting with, and embracing, Louis Farrakhan, nothing short of resignation is acceptable from these seven Democrats.”

However, none of the Democrats named have responded to the criticism except for Rep. Davis who doubled down on his relationship with Farrakhan.

“The world is so much bigger than Farrakhan and the Jewish question,” he told The Daily Caller on Sunday. He also called Farrakhan an “outstanding human being.”

CNN’s Jake Tapper wondered earlier this week "why is it so tough for some people to condemn a rabid anti-Semite who is also a misogynist and anti-LGBTQ?"

Tapper brought up that, a year after Obama left office, a journalist admitted that he suppressed a photo of then-Illinois Senator Barack Obama with Farrakhan at a Congressional Black Caucus meeting that he took in 2005 due to fears that it would affect Obama’s ultimately successful Presidential bid.

"People want to have the association, but they don't want to get dinged for it publicly," he reflected.