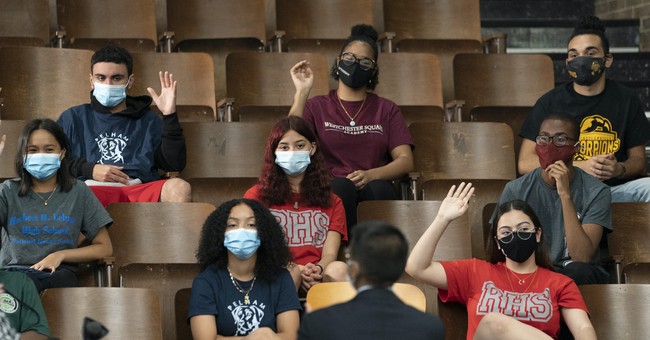 The Florida Department of Education issued sanctions against school board members on Monday for requiring students to wear masks, which defies a state judge's ruling that government officials had no authority to impose such penalties.

Officials withheld salaries of board members in Alachua and Broward counties who supported school mask mandates, upholding a prior promise from Gov. Ron DeSantis.

"We’re going to fight to protect parents' rights to make health care decisions for their children," Florida Education Commissioner Richard Corcoran said in a statement, according to POLITICO. "What’s unacceptable is the politicians who have raised their right hands and pledged, under oath, to uphold the Constitution but are not doing so."

The financial penalties were issued following a Friday ruling from Leon County Circuit Judge John Cooper, who said that Florida officials did not have the authority to ban schools from imposing mask requirements. DeSantis has said he plans to appeal the court's decision. Cooper's ruling came from the bench and an official order has yet to be posted by the court.

The DeSantis administration argues that the state's "Parents’ Bill of Rights" prohibits school districts from requiring students to wear masks.

Florida's DOE imposing financial penalties on school districts is the most recent move in the fight over masking students. So far, 11 counties have ignored DeSantis' orders that bar school from reinstating mask mandates.

The Biden administration has even gotten involved in Florida's mask mandate controversy and has vowed to reimburse local school boards that are hit with financial consequences for requiring students to wear masks in school.