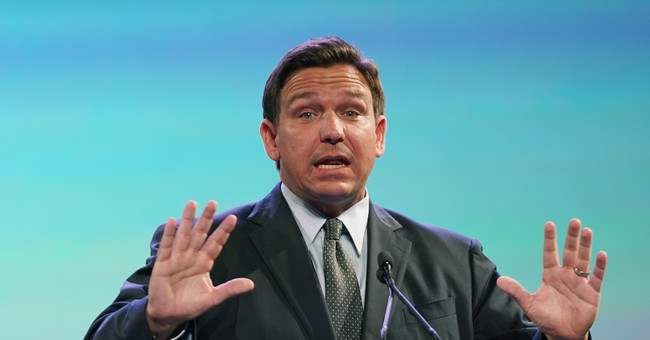 Florida Gov. Ron DeSantis' press secretary received a 12-hour Twitter suspension Friday after she repeatedly called out a reporter at the Associated Press for writing a story that she referred to as a "hit piece."

Christina Pushaw tweeted at AP reporter Brendan Farrington several times on Tuesday over his story headlined, "DeSantis top donor invests in COVID drug governor promotes." Farrington, who has since made his Twitter private, said he received threats from other users after Pushaw criticized him for his article.

Incoming AP CEO Daisy Veerasingham sent a letter to DeSantis' office following the incident on Twitter, accusing Pushaw of threatening Farrington and "activating" an online mob against him.

The @AssociatedPress is writing @GovRonDeSantis today re: his press secretary, @ChristinaPushaw, and her "direct effort to activate an online mob to attack" a @FLPressCorps reporter. "We call on you to eliminate this attack strategy from your press office," the AP's exec VP asks. pic.twitter.com/ghyK7Lwy2K

However, Pushaw denied the AP's claims that she threatened their journalist.

"No one from our office ever threatened him," Pushaw told FOX News. "His story drew harsh criticism because it was false - and discouraged people from seeking life-saving treatment. Instead of owning up to that and retracting their hit piece, AP doubled down and tried to make the story about the backlash the reporter received."

The AP's report covered DeSantis urging COVID-positive Florida residents to take a monoclonal antibody treatment created by Regeneron, in which a company of a major DeSantis donor has invested millions in.

However, in the story, the AP also noted that the drug had been shown to be highly effective and was also touted by the Biden administration. DeSantis donor's hedge fund, Citadel, also was reported in the AP story to have had a smaller share in Regeneron than BlackRock, which has donated more to Democrats.

The article also includes that Citadel's Regeneron investment is only "a tiny fraction of its overall $39 billion in investments."

Pushaw said that she believed AP politicized the story in an effort to demonize DeSantis, who is widely considered to be potential 2024 GOP presidential candidate.

"They got caught publishing misinformation that could endanger the lives of Floridians by making them unduly trust a life-saving treatment … over a governor they've decided they don't like," Pushaw said. "They got called out for it in part because of me, in part because the story was so obviously wrong … They brought this on themselves by publishing this kind of dangerous misinformation."

Pushaw said she deleted a tweet that said "Drag Them" when responding to a critic of the AP's tweet of its original story after Farrington told her he was receiving threats. She said she deleted the tweet because she did not support any threats against the reporter and that she was not attempting to cover her tracks.

A Twitter spokesperson confirmed to FOX that Pushaw was suspended for violating the platform's policies. However, they would not comment on which tweets led to her suspension.

"You will ban the press secretary of a democratically elected official while allowing the Taliban to live-tweet their conquest of Afghanistan?" Pushaw said of Twitter in a comment to FOX News. "This proves Governor DeSantis right - again. Those who challenge false narratives are often too silenced by corporate media and Big Tech collusion."