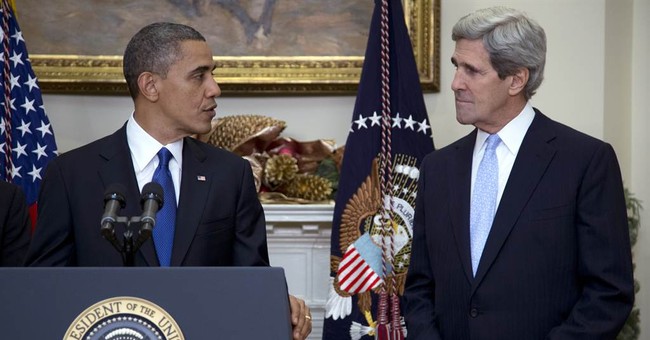 President Obama's secretary of state addressed the media today, laying out what the Administration believes to be the facts regarding last week's chemical attack in Syria but stopped short of stating that military action is on the table.

"The indiscriminate slaughter of civilians, the killing of women and children and innocent bystanders by chemical weapons is a moral obscenity. By any standard, it is inexcusable and — despite the excuses and equivocations that some have manufactured — it is undeniable," said Kerry, the highest-ranking U.S. official to confirm the attack in the Damascus suburbs that activists say killed hundreds of people.

"This international norm cannot be violated without consequences," he added.

"We continue to believe that there's no military solution here that's good for the Syrian people, and that the best path forward is a political solution," State Department spokeswoman Marie Harf said. "This is about the violation of an international norm against the use of chemical weapons and how we should respond to that. "

The Associated Press also reports that President Obama "has not decided how to respond to the use of deadly gases, a move that the White House said last year would cross a 'red line.'" The red line has been crossed, yet the Administration "has not set a timeline for responding."

Meanwhile, United Nations inspectors are reportedly at the site of the chemical attack, gathering evidence and considering options even while the Assad regime denies ever using such weapons.