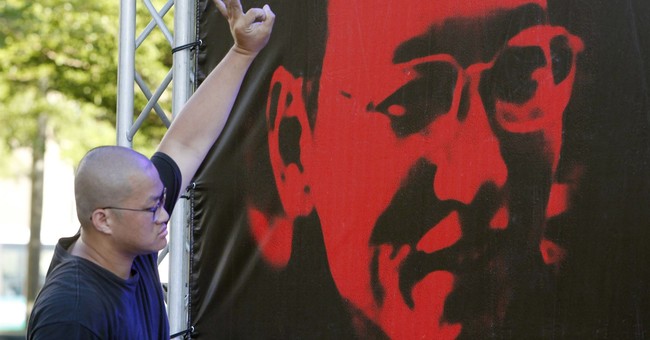 The Taipei Times, a media outlet of a Chinese Communist party, has reacted to unconfirmed reports that if U.S. Marines are stationed at Taiwan’s de facto station for diplomatic missions from Washington it would be an “invasion” of Chinese territory.

“Taiwanese media outlets reported at the weekend that a small contingent of Marines will be posted at the newly-dedicated American Institute in Taiwan compound, which is due to begin operating formally in the fall,” reports CNS News.

This is not a new tactic; U.S. Marine Security Guards have been stationed at U.S. diplomatic stations around the world since WWII.

In 1979 the U.S. switched recognition to the communist government in Beijing. The AIT serves as the embassy in Taipei. Similarly in the U.S. the Taipei Economic and Cultural Representative Office serves as the Taiwan Embassy.

There has been no official confirmation of reports that U.S. Marines will be stationed at the new AIT compound valued at $250 million, which was previously the headquarters of the U.S. Military Assistance Advisory Group, which was home to the AIT since the relationship changed in 1979.

“As is the practice at our current location, a small number of American personnel detailed to AIT along with a larger number of locally-hired employees will provide security for the new office building in cooperation with the local authorities,” an AIT official told Taiwan’s Central News Agency.

“Only U.S. embassies and consulates are guarded by Marines…Posting U.S. Marines to the AIT would mean a public U.S. declaration that the AIT is equivalent to a U.S. embassy or consulate instead of a non-governmental institution,” was written in a Global Times editorial.

Taiwan has strong support in the U.S. Congress. In 1979, the same year that the Carter administration cut their diplomatic ties with Taiwan and switched to the mainland government in Beijing, Congress passed the Taiwan Relations Act. This act commits that the U.S. provides the island with military assistance and protects it from unprovoked aggression.