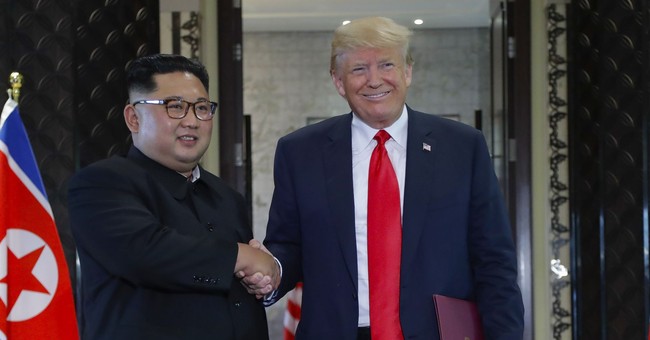 President Trump is aboard Air Force One and on his way home after participating in a historic Singapore summit with North Korean dictator Kim Jong Un. The White House is marking the meeting down as a success after the two leaders signed an agreement to move the relationship forward, in addition to receiving a pledge the regime will denuclearize.

"Mr. Chairman, it's a great honor to be with you.  And I know that we will have tremendous success together, and we will solve a big problem, a big dilemma that, until this point, has been unable to be solved.  I know that, working together, we will get it taken care of.  So it's a great honor," President Trump said at the signing ceremony early Tuesday morning.

"We overcame all kinds of skepticism and speculations about this summit and I believe that this is good prelude for peace," Kim responded.

According to a new Fox News poll, the vast majority of Americans thought it was a good idea for President Trump to sit down with Kim, despite believing the regime will never give up its nuclear weapons.

Optimism is increasing on #NorthKorea, as more voters now think it could be convinced to give up its nuclear weapons (28% feel that way, up 12 pts. from 16% in March) - still, 60% say NK won’t ever let go of its nukes @FoxNews #Poll https://t.co/NpLLdU0J1m pic.twitter.com/gCI6A8o5Yi

“Americans have mixed feelings on North Korea.  They want the U.S. to negotiate with Kim Jong Un even though they doubt the North Koreans would ever concede on the main sticking point between our countries: nuclear weapons,” Daron Shaw, a pollster who worked on gathering the Fox News results said. “They also seem to think President Trump might be able to get a good deal, even though no one has a clue as to what that deal might entail.”

President Trump said he looks forward to "many meetings" with Kim Jong Un during a press conference Tuesday morning.