Pretty Much Everyone is Calling James Comey a Liar 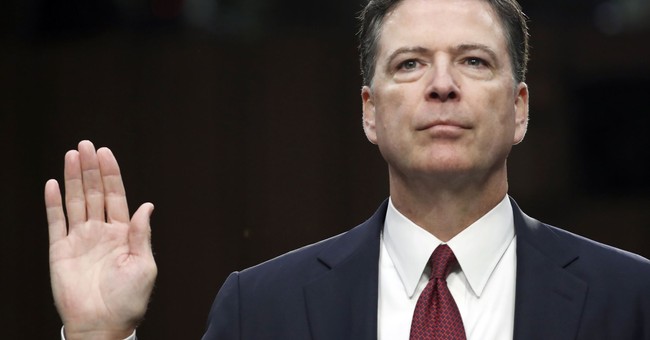 Unless you've been living under a rock, you're aware former FBI Director James Comey is out with a book this week about his time at the Bureau and settling scores with the man who fired him: President Trump.

But it isn't just Republicans going after Comey for what many argue is a publicity tour about...James Comey -- not  a "higher loyalty" as his book title claims.

If critics aren't calling him a liar, they're slamming his behavior a degradation of his former position.

I never asked Comey for Personal Loyalty. I hardly even knew this guy. Just another of his many lies. His “memos” are self serving and FAKE!

Unbelievably, James Comey states that Polls, where Crooked Hillary was leading, were a factor in the handling (stupidly) of the Clinton Email probe. In other words, he was making decisions based on the fact that he thought she was going to win, and he wanted a job. Slimeball!

Comey’s misconduct once led both Republicans and Democrats to call for his firing. His reputation rehabilitation book tour won't help. https://t.co/g5jnfial6k

We want to remind the American public of REAL James Comey. That’s why we’re putting a counter narrative out there. https://t.co/FcoMlJELC4

Longtime Hillary Clinton spokesman Nick Merrill delivered an unsparing Twitter diatribe against Comey ahead of the release of “A Higher Loyalty.”

Merrill blasted Comey for allegedly dancing around dozens of questions in Sunday’s ABC interview by answering with “maybe,” accusing him of “hubris” and again faulting him for the election of Trump – whom he called “the most self-involved, destructive leader the U.S. has ever known.”

Merrill zeroed in on Comey’s two most controversial actions during the Clinton email probe: His July 2016 public announcement recommending no criminal charges while calling Clinton “extremely careless” and his October 2016 announcement that the bureau was revisiting the case after the discovery of potentially relevant emails on former Rep. Anthony Weiner’s laptop.

“He made a public spectacle of the conclusion of the email investigation, breaking with Department norms, calling into question the integrity of the process,” Merrill said of the July announcement. “It did nothing to quiet the Trump campaign from accusing the FBI of bias & did everything to make Americans feel uneasy.”

The truly devastating@AriMelber takedown of the ham-handed @Comey injection of pure politics into the constitutional processes of criminal law enforcement and impeachment was utterly brilliant — something I rarely say about even the best legal journalism. Props to @AriMelber!

"I have known James Comey almost 30 years. Throughout his time as Director we spoke regularly about some of the most sensitive issues in law enforcement and national security. If he had any concerns regarding the email investigation, classified or not, he had ample opportunities to raise them with me both privately and in meetings. He never did."